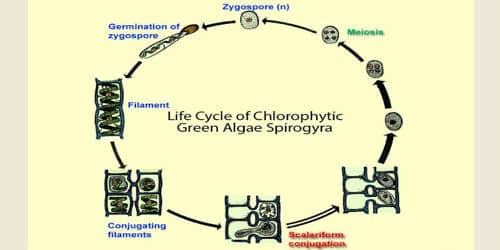 Spirogyra is a cosmopolitan, freshwater, filamentous green alga, represented by about 300 species. It is commonly known as pond silk, water silk, pond scum, or mermaid’s trees because of their bright green silky appearance.

The life cycle of Spirogyra Consists of the following phases 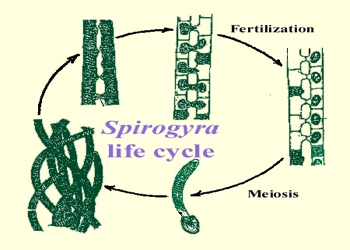 Zygote (2n) is the only step of the sporophytic generation. The diploid generation ends just after the meiosis division.

Formation of a new plant from haploid spore (n)

Out of four cells formed from meioses division, only one remains active and three others have degenerated.

The life cycle of Spirogyra:

In Spirogyra, three types of the life cycle can be seen – vegetative and sexual cycles are most common. But asexual cycle occurs only occasionally.

During the growing season, the vegetative filament of Spirogyra undergoes fragmentation, so that each fragment independently develops into a new filament by repeated cell division and elongation.

The asexual life cycle is less common and reported only in a few Spirogyra sp. Asexual cycles involve the formation of aplanospores, akinetest, zygospores.

In Spirogyra, the sexual reproduction involves a cycle alternation between a haploid vegetative filament and a diploid zygospore, towards the end of the growing season the Spirogyra filament produces aplanogametes in vegetative cells called gametangia.

Discuss the Economic Importance of Bacteria