You are here: Home Biology What are the changes that occur to the Ovule after Fertilization?

Fertilization is the fusion of the male gamete and female gamete to form a zygote in plants. After fertilization, the zygote divides to form an embryo. The fertilized ovule develops into a seed that contains embryo enclosed in a seed coat. As the seed grows the floral parts wither and falls off. Meanwhile, the ovaries grow in size and ripen to form fruit.

In flowering plants, the fertilization is therefore termed as double fertilization as the two male nuclei in the pollen grain fuse with the egg and the polar nuclei to form the diploid zygote and the triploid endosperm. 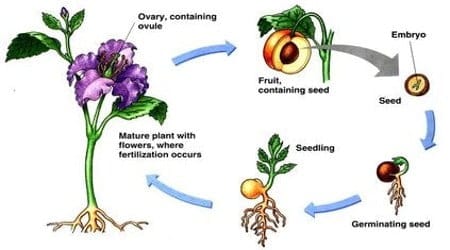 (i) The ovary turns into a fruit. This procedure is called germination. Germination is the procedure of a seed sprouting and its growth into a young plant. Once the fruit and seeds are completely developed, the plant embryo inside of the seed goes into a dormant (inactive) state.

(ii) The ovary wall turns into the fruit wall. The ovary surrounding the ovules develops into a fruit that contains one or more seeds. The sepals and petals are falling off.

(iii) The ovules turn to seeds. Each seed contains a tiny, undeveloped plant called an embryo. The integument of the ovules become the seed coat of the seed. There is the formation of a diploid zygote and it develops into an embryo, which forms the future plant.

(v) The nucellus in most cases become, exhausted.

(vi) The egg forms the embryo. The fusion of one of the male nuclei along with the female gamete in the ovule leads to the development of the zygote. The zygote undergoes cell divisions to give augment to the embryo.

(viii) The synergids degenerate and the antipodal cells degenerate. In most of the plants, the antipodals and synergies disintegrate before, during or immediately after fertilization.

(ix) The micropyle remains as it is.