Differences between the hepatic portal and renal portal system and its significance are given below:

Different parts of the digestive system such as the stomach, intestine, pancreas„ spleen, etc. and wins come from hind limb are united together and enters into the liver and breaks into capillaries instead open to heart. The hepatic portal system comprises the portal vein and its branches. Blood from spleen, stomach, pancreas, intestine enters into veins which combine to form the portal vein. 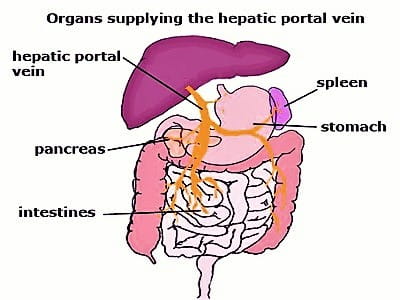 Liver. The hepatic portal system will carry nutrients absorbed from the digestive system which need further processing in the liver. This leads to the liver. Inside the liver, the portal vein splits into capillaries.

A Hepatic portal system is a group of veins that carry blood from the capillaries of the stomach, intestine, spleen, and pancreas to the sinusoids of the liver.

Portal vein brings blood that is rich with nutrients to the liver for storage and metabolism. The function of the hepatic portal circulation is to route the venous blood (in this respect, deoxygenated blood) from the GI (gastrointestinal) tract through the liver, before mixing it with venous blood from the rest of the body through the inferior vena cava, a short distance from the right atrium of the heart.

Absorbed food of alimentary canal and transport into the liver. This food is differentiated into the liver and sends them to the place of necessary and store the excess food. Additionally, the hepatic portal system plays a key role in purification the blood of the bacteria and toxins that are picked up by the blood while it is being perfused through the intestines.

The hepatic portal vein is one of the most significant veins that receive blood from the body and transports it into the liver for filtration and dispensation. The absorbed food is stored into the liver not circulated meaning lastly into the body and food is distributed when in need.

The femoral and sciatic vein united together to form renal portal vein this vein opens into the kidney and breaks into capillaries. A renal portal system is a portal venous system found in all living vertebrates except for hagfish, lampreys, and mammals. This system is found in birds, amphibians, reptiles, and fish. 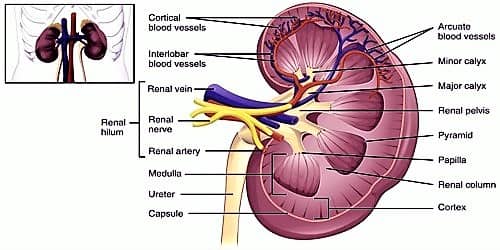 Kidney. The renal portal system is a second route by which blood moves from the back half of the body through the kidneys before returning to the heart.

By the system filtration of metabolic waste and excretion of these materials of the blood by the kidney is done. Its function is to supply blood to renal tubules when glomerular filtration is absent or downregulated.