You are here: Home Biology Experiment to Demonstrate: Oxygen is Evolved during Photosynthesis

Photosynthesis is the procedure plants apply to adopt energy from the sun, carbon dioxide, and water into food. During this procedure, green plants use energy from solar radiation, Carbon Dioxide from the environment, water and minerals from obtained from soil to arrange their carbohydrate food and in turn develop oxygen. During the light-dependent effect, oxygen will come from splitting of water when it is in photosynthesis stage.

The aim of the experiment: To prove that oxygen is evolved in green plants during photosynthesis.

Here use Hydrilla plants. Hydrilla plants are water algal plants. These plants can bring out photosynthesis even they are surrounded by water. Using synthetic compound Nafion, Splitting water will be converted into oxygen and hydrogen.

Requirements: A large Beaker, Some Hydrilla Plant, One Funnel, One Test tube, water,  a glowing splinter of wood and a beehive arrangement. 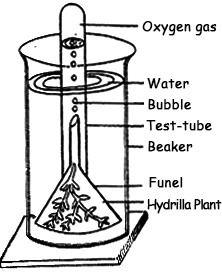 Observation: After sometimes it will be seen that bubbles are coming out from the Hydrilla plant and are accumulating in the test tube. After the accumulation of some gas, the test tube should be taken out carefully and a glowing splinter of wood be thrust into the test tube, it will burst into flame.

From the cut ends of the plant some bubbles are coming out constantly and they are collected at the top of the test tube by displacing the water. On testing this gas it is found that it is oxygen. A bubble of gas is noticed in the experiment.

The liberated gas is oxygen and it is evolved due to the photolysis of water under the procedure of photosynthesis. The liberated gas comes in the intercellular spaces and eventually evolves out during the stomata.

Conclusion: As the gas helps the glowing splinter to flame so the gas is Oxygen because Oxygen does not flame itself but helps others to the flame.

The gas that evolved in the top tube is oxygen because; it is a known test for oxygen that oxygen rekindles a glowing splint. The oxygen consequence of photosynthesis is utilized in another procedure in the plant: cellular respiration. This is how the plant generates energy, or ATP, to survive. If oxygen isn’t released during photosynthesis, it opposes procedure, cellular respiration, cannot happen, and there will be a lack of ATP generated and the plant will die.