A number of intermediate compounds of this procedure are significant industrially and economically. As a result, it can be appropriately and entirely used for cellular activities without any wastage. It conserves 40% of the energy (as ATP) released in the oxidation of the substrate. Thus, aerobic respiration shows 40% efficiency. 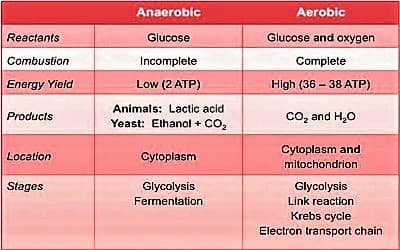 The significance of Anaerobic respiration are described below –

However, the effectiveness of anaerobic respiration is moderately low i.e. just 2.12 % only. It means, it conserves only 2.12 % of the total released energy in the usable form (ATP energy).