You are here: Home Biology Pleistocene Uplands In Bangladesh

During the Pleistocene era (25,000 years ago), many regions of the world became raised and formed uplands. These regions are called Pleistocene uplands. Pleistocene Terrace a bench-like structure bordering an undersea feature. During Pleistocene time, sea level fluctuated in response to the quantity of glacial ice on the continent.

In Bangladesh, the Barendro region, Modhupur Gorh and Lalmai hills are parts of these uplands. Topographically these Pleistocene Terraces are slightly elevated from the adjacent active floodplains. The environmental characteristics and flora and fauna of these regions are almost similar. But the large area of Shaalbon is noticeable. The sediments of these Terraces are deeply weathered and strongly oxidized. 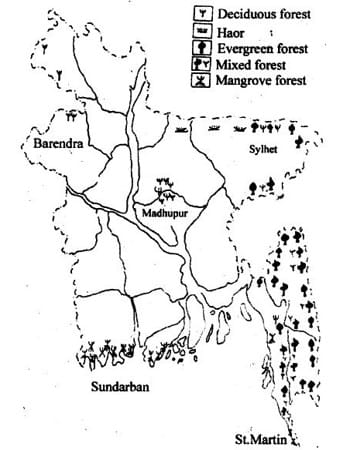 Environmental Characteristics: Soil of Pleistocene uplands is infertile and reddish or somewhere grayish. Rainfall is inadequate, less than 2000 m.m. in a year. Climate is to some level severe, high temperature in summer, dry winter, less humidity in the air; these are the characteristics of this region.

Major Plants: One of the characters of this upland is the presence of Shaalforest. 97% tree of this forest is Shaal tree from which the name Shaal forest originates. Among other trees, there are wild Chalta, Gachhi Gajari, Koroi, Kumvi, Gamari, Palash, Vela, Bahera, Haritaki, etc.

Major Animals: Monkeys, squirrel, jackals Langoor, several species of snakes, mongoose and different kinds of birds are the major animals of the Barendra region. In the Modhupur region, the major animals are monkeys, entellus, jackals, lizards, woodpeckers, owls, kites, mongoose, water monitor, squirrels and tree frogs. Once leopard and deer were abundant here but now they are very scanty.