Researchers at the Boston University School of Medicine (BUSM) are offering a new genomics resource that describes the small RNA transcriptomes (gene expression) of four biomedically important mosquito species. This is the first research to offer a forum for biologists to compare the traits of these small RNAs between these four mosquitoes and the most commonly used insects for genetic studies, the Fruit Fly, Drosophila. Although previous studies looked at each of the individual species of mosquitoes separately, this study was the first to allow comparisons between all four species.

Mosquitoes are one of the most prevalent vectors of human pathogens, yet there is a wide variation in the ability of the sub-clades to vector different pathogens. While mosquitoes are major transmission vectors for pathogenic arboviruses, viral infection has little effect on the health of mosquitoes. For example, all human malaria parasites are exclusively vectored by anopheline mosquitoes yet these same mosquitoes transmit few viruses other than O’Nyong nyong virus (ONNV) and Mayaro virus.

This immunity is due in part to mosquito RNA interference (RNAi) pathways that produce antiviral small interference RNAs (siRNAs) and Piwi-interactive RNAs (piRNAs). The major mosquito innate immune response to viral infections, RNAi, is dramatically different from the human immune response, and this disparity may be the basis for disparate infection outcomes in both hosts.

“Although mosquitoes are related to Drosophila, they have very different genomes. In addition, mosquitos bite humans for blood meals that allow them to reproduce and but unfortunately allows serious human pathogens like viruses to infect us and cause diseases like yellow fever virus, dengue fever virus, zika virus and eastern equine encephalitis virus,” said the corresponding author, Nelson Lau, P. (BUSM). 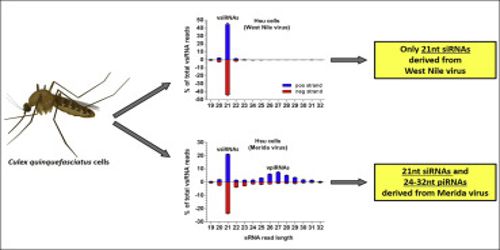 The four mosquito species have a global impact on human health. Anopheles is the main vector for a malaria-causing parasite, but it is not known to spread many viruses. In comparison, Culex and Aedes mosquitoes are well known to transmit viruses between humans during mosquito bites, but it is still unclear whether there is such a disparity between mosquito species due to their ability to spread viruses.

According to the researchers, this work would lead to improved biochemical studies in mosquito cells. “If we can find weaknesses in the small RNA pathways of mosquitoes to make them more intolerant of viruses, perhaps they won’t be so able to pass the virus from biting one human to the next human victim.” Research-based on RNAi as the primary antiviral mosquito response has the greatest potential to build a thorough understanding of mosquito innate immunity.

This research was a partnership between the Lau Laboratory in the Department of Biochemistry and the John Connor and Tony Colpitts Laboratories of the BU National Emerging Infectious Disease Laboratory (NEIDL) as well as several other mosquito biologists in the United States and the United Kingdom.