International Trade is the exchange of goods and services between countries. This type of trade gives rise to a world economy, in which prices, supply, and demand are affected by global events. International trade contributes a significant portion for a nations total GOP. Business organizations get a high level of privilege during operating in the international market.

The theories of Smith and Ricardo didn’t help countries determine which products would give a country an advantage. Both theories assumed that free and open markets would lead countries and producers to determine which goods they could produce mo efficiently. In the early 1900s, two Swedish economists, Eli Heckscher and Bertil Ohlin, focused their attention on how a country could gain a comparative advantage by producing products that utilized factors that were in abundance in the country. Their theory is based on a country’s production factors – land, labor, and capital, which provide the funds for investment in plants and equipment. They determined that the cost of any factor or resource was a function of supply and demand. Factors that were in great supply relative to demand would be cheaper; factors in great demand relative to supply would be more expensive. Their theory also called the factor proportions theory, stated that countries would produce and export goods that required resources or factors that were in great supply, and, therefore, cheaper production factors. In contrast, countries would import goods that required resources that were in short supply, but higher demand.

For example, China and India are home to cheap, large pools of labor. Hence these countries have become the optimal locations for labor-intensive industries like textiles and garments. 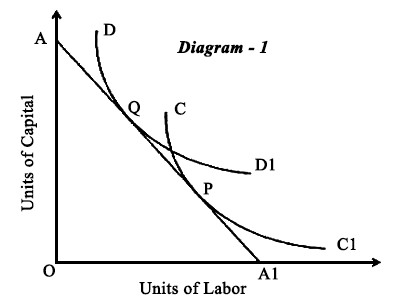 Suppose a situation as given in diagram -1

Now assume a situation as in diagram -2

where there is a change in the relative prices of labor and capital. Say a country B which has abundant labor. The slope of the resource constraint changes to BB1. 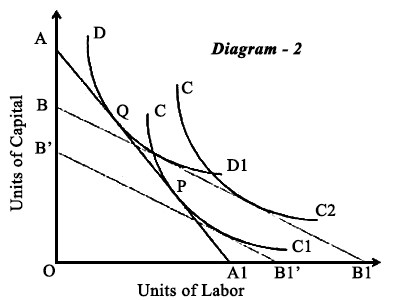 It can be seen that with the resource constraint slope at BB1, the country can produce units of Bread on DD1. However, it can produce a higher amount of cloth at CC2 with the same amount of resources.

On the other hand, it can produce the original quantity of cloth CC1 with much lesser resources BB1.

Whereas, country A, being a capital abundant country, would be more efficient in the production of Bread and end up exporting bread to country B.