You are here: Home Chemistry Describe Uses of Alkyne

Alkyne is the series of unsaturated hydrocarbons containing a triple bond, including acetylene. Acetylene, also referred to as ethyne, is one of the most well-known and widely used alkynes. Alkynes are hydrocarbons, which are natural chemical compounds containing carbon (C) and hydrogen (H) atoms, and the characteristic that makes them recognized as alkynes is the occurrence of triple bonds. 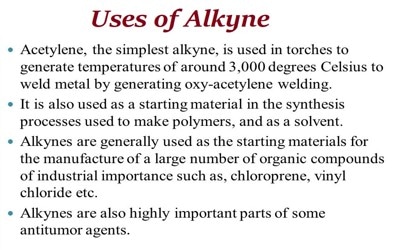 (ii) In oxyacetylene flame. The most important alkyne is C2H2, generally called acetylene. The burning of acetylene produces a very hot and luminous flame. It is the fuel used in oxyacetylene torches, proficient in producing extremely high temperatures (approx. 3,000 ° C), thereby lending itself to welding and cutting metals. For this cause, it is used in lanterns for cave exploration.

(iii) For the preparation of acetaldehyde, acetic acid, and ethyl alcohol. Some of these alkynes are used to make organic compounds such as ethanoic acid, acrylic acid, and ethanol.

(iv) For the manufacture of PVC, Polyvinyl ethers and neoprene rubber. A polymer is a macromolecule that consists of many repeated subunits. It is used for making polymers and its beginning materials. For example, vinyl chloride is used as the initial substance for PVC and chloroprene is used for synthetic rubber neoprene. Neoprene is a non-natural rubber that does not burn or get take on by oils.

(vi) As fuel. The overriding alkyne in acetylene is used as a fuel where many kilograms are produced every year by fractional oxidation of natural gases. Acetylene was first used to light moveable lamps, which were known as acetylene gas lamps, installed in homes, bicycles and on cars.

(vii) Drug production; Alkynes are used in the production of numerous drugs on the market, such as antiretroviral efavirenz and the antifungal terbinafine.

(viii) Chemical production; Acetylene is also used in the production of a few inorganic compounds, used in the combination of vitamins like vitamins A and E.

If ethyne is passed through Fe pipe- heated at 400°C, polymerization of ethyne occurs & benzene is produced. The reaction also occurs at -70°C in presence of Ni. Propyne produces Mesitylene.