You are here: Home Chemistry Electrophoresis

Electrophoresis is a chromatography technique by which a mixture of charged molecules is separated according to size when placed in an electric field. A simple experiment may be carried out in order to firmly establish that colloid particles are electrically charged. Some arsenious sulphide sol is taken in a U-tube as shown in Figure. Two platinum electrodes are dipped into the sol in the two limbs of the L-tube and an e.m.f. is applied. It will be observed that the arsenious sulphide particles migrate towards the anode like negatively charged ions. If the e.m.f. is applied for a sufficient length of time a clear liquid free of the sol can be seen around the cathode. 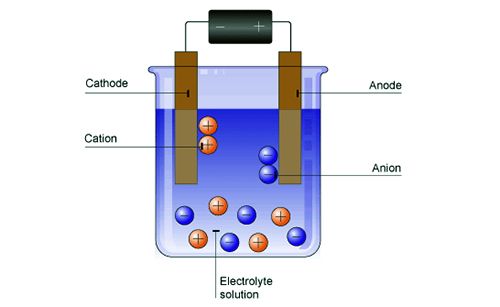 In the case of lyophilie Colloids like proteins the magnitude of the charge, measured by the rate of movement of the colloid particles of the same substance depends on the pH of the solution. The isoelectric point of a protein solution is the pH at which the colloid particles show no movement under an electric field, i.e., the particles carry no charge. In solutions more acidic than the isoelectric point the particles move to the anode while in less acidic solutions they move to the cathode.