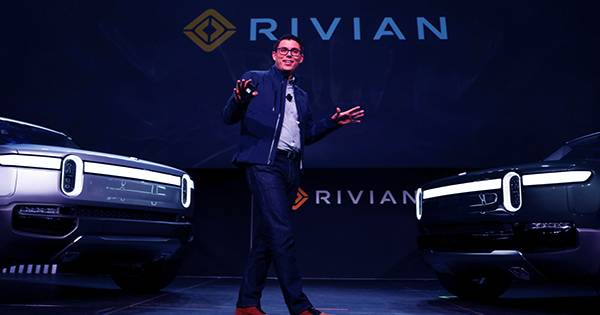 Rivian’s exhilaration reached new heights on Wednesday, when it became a publicly listed corporation with an opening share price of $106.75. If it holds true, Rivian’s estimated value will be $90 billion. The opening price was about 37% more than the $78 advertised IPO price. Rivian’s market cap is now higher than GM and one of its sponsors, Ford (GM’s market cap is $86.31 billion; Ford’s is $78.2 billion), making it one of the biggest IPOs in the US history. After trading began about 1 p.m. ET, the stock continued to soar, reaching a high of $119 before dipping to around $112.

RJ Scaringe, the founder, and CEO of Rivian is well aware of the IPO’s unprecedented scale. However, he remains optimistic about the future of electric vehicles, predicting in a recent interview that the 90 to 100 million vehicles sold each year would be converted to electric in the next 10 to 20 years. “At the end of the day, how investors see the space is basically pricing what the future looks like,” Scaringe explained. “Within a few years, 100% of the business will be electric.” While Rivian is still in its infancy in terms of cars and launch, Scaringe believes investors see and value the company’s potential.

“I think they’d be missing the point of the company if they were assessing us only on our P&L (profit/loss) today,” he added. “Of course, they’re looking at what they think the firm is capable of doing overtime.” Rivian’s capabilities have yet to demonstrate; investors, clients, and industry watchers will find out soon enough. However, it has big aspirations for the future, which go far beyond its first two consumer cars, the R1T pickup truck and the R1S SUV, and its cooperation with Amazon to build 100,000 electric commercial delivery vans by 2024. Rivian wants to deploy a variety of consumer and business goods, according to patent records and Scaringe’s own statements to TechCrunch.

Investors may also be banking that Rivian’s attempt to vertically integrated — it even aims to manufacture its own battery cell in the end — would propel the business to the forefront of technology. “It’s vital to control and vertically integrate what we’d call the core technological stack – all of the vehicle’s electronics, the whole software stack, and the vehicle’s propulsion layer,” Scaringe added. “Of all those things, I would say software and electronics are the most crucial.”

Since Rivian made its IPO filing public last month, it has been a crazy journey (it filed confidentially for the IPO in August). Rivian’s financial status, dangers, and prospects are all addressed in the document, which reveals a firm burning through cash as it takes on the capital-intensive chore of designing, developing, producing, and then selling electric vehicles. The business intended to sell 135 million shares for between $57 and $62 each. Additionally, underwriters had the opportunity to purchase up to 20.25 million additional shares.

To say that investor demand has been frantic in 2021 would be an understatement. According to a regulatory document issued late Tuesday evening, Rivian not only increased its target share price twice, eventually listing its initial public offering at $78 per share, but it also added more and offered 153 million shares of common stock. Rivian also provided underwriters the option to purchase an additional 22.95 million shares, which was greater than planned. Some of the IPO’s greatest advocates will gain from its scale. Amazon, which has a 20% share, and Ford, which has a 12% interest, own Rivian.

Rivian’s stock has risen significantly for a variety of reasons. It is currently worth more than major automakers that create and sell millions of automobiles each year, for example. At Rivian, on the other hand, revenues are low and costs are considerable.

Thousands of people have been recruited at the company’s many locations, including its plant in Normal, Illinois. Scaringe told TechCrunch in an interview Tuesday evening that the firm currently employs over 9,000 individuals. Scaringe’s focus on vertical integration has driven R&D spending higher as well. (In 2020, the firm spent $766 million on research and development.) The business spent $683 million on research and development in the first half of 2021.) As a result, net losses have increased as the company prepares to launch the R1T pickup truck and R1S SUV. The company’s net loss in the first half of 2021 was $994 million, more than double the $377 million loss it experienced in the same period of 2020.