When θi > θc, we have total internal reflection, but there must still be an EM field present on the the other side of the interface to satisfy the boundary conditions. This transmitted EM wave will have wave vector 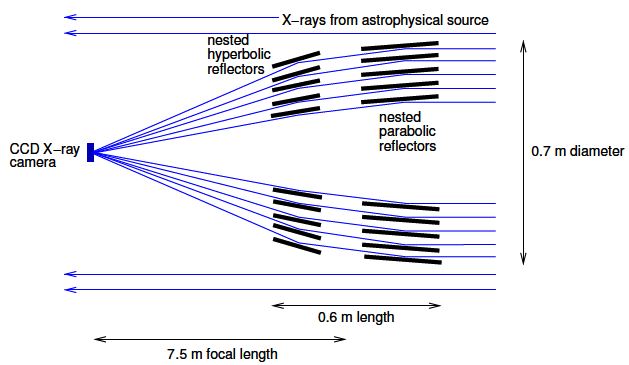 Figure: Cross-section through an imaging X-ray telescope (not to scale). Dimensions given are for the XMM-Newton X-ray telescope for which the 58 concentric mirrors are made of nickel coated with gold and are separated by 1-5 mm.

Hence the transmitted EM wave is

and we see that we have a wave propagating in the e3 direction (i.e. parallel to the surface) and so is a surface wave. However, the wave is decaying exponentially in the e1 direction, i.e. with distance away from the surface of the dielectric. Such a surface wave is called an evanescent wave. Examining last Equation we see that the decay distance for the electric field is ≈ c/w, or of the order of magnitude of the wavelength, and that the wave cannot propagate into the region away from the dielectric as a monochromatic plane wave.

Evanescent waves may cross a small gap (as in quantum tunnelling) if a slab of similar dielectric is brought within a few wavelengths of the dielectric in which the wave is incident. In that case part of the incident wave tunnels through the gap and propagates in the slab as a monochromatic plane wave in the same direction as the original incident wave, but with reduced intensity depending on the width of the gap. This “frustrated total internal reflection” has practical applications in optics with beam-splitters and optical fibre junctions.