Canal rays are the rays of radiation which emerges in a tube which has been discharged and has the property of low pressure with a voltage of high-value conditions. While conducting experiments on the gas discharge, in 1886, German Physicist, E.Goldstein, discovered that if the cathode used is perforated, luminous streams appeared in the tube behind the cathode. These streams were called as canal rays. These are radiation which is positively charged and was the key in the discovery of proton, another positively charged subatomic particle. The discharge tube designed by Goldstein is shown in Figure. The beam of rays which travel in a direction away from the anode towards the cathode when gas is taken in a discharge tube is subjected to the action of high voltage under low pressure is known as canal rays. The tube contains an anode (A), a perforated cathode (K), and a fluorescent screen (S). 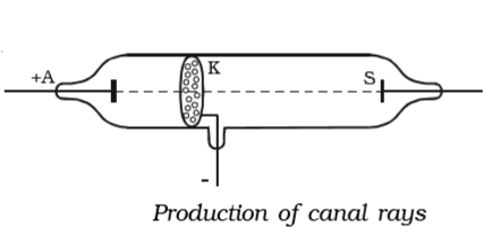 Electrons released from the cathode collide with atoms of the gas present in the tube knocking out of each of these atoms one or more additional electrons. At a pressure of about 1mm of mercury, a luminous stream of particles was observed behind the cathode proceeding in a direction opposite to that of the cathode rays. These collisions leave behind positively charged ions. Goldstein, called them canal rays since they pass through and emerge from the holes, in the cathode in straight lines, opposite to the direction of the cathode rays. The positive ions produced move toward the cathode. Some of the positive ions flow through the perforations in the cathode disc forming canal rays. From the nature of the deflection produced, by a magnetic field or electric field, these rays were found to be positively charged particles. Canal rays are deflected in the opposite direction from cathode rays by both electric and magnetic fields. These rays were positively charged radiations which ultimately led to the discovery of another sub-atomic particle. Hence, canal rays are most commonly known as positive rays.

(ii) They are deflected by electric and magnetic fields. Their deflection is opposite to that of cathode rays.

(iii) They are positively charged radiation produced in a discharged tube containing a gas at low pressure when a high potential difference is applied between the electrons.

(iii) They travel in straight lines. They are seen moving from the anode towards the cathode in the specially designed discharge tube.

(v) They affect photographic plates. These rays can produce fluorescence.

(vii) They ionize the gas through which they pass. The positive ions attracted to the cathode pass through the holes and emerge on the other side as positive rays.