Cathode rays are streams of electrons observed in vacuum tubes. These rays are invisible but their effect is to excite atoms in the glass opposite of the cathode, by the anode. These rays come from the cathode because the cathode is charged negatively. If an evacuated glass tube is equipped with two electrodes and a voltage is applied, the glass opposite the negative electrode is observed to glow from electrons emitted from the cathode. Cathode rays can be deflected by an electric field, which is evidence of it being composed of electron particles rather than photons. These rays focused on a hard target (anticathode) produce X-rays or focused on a small object in a vacuum generate very high temperatures. The rays of electrons can also pass through the thin metal foil. However, cathode rays also exhibit wave-like characteristics in crystal lattice experiments.

J.J.Thomson discovered a new subatomic constituent of cathode rays in the year 1897. He used the cathode ray tube to determine that atoms had small negatively charged particles inside of them, which he called “electrons.” These rays are so named because they are emitted by the negative electrode, or cathode, in a vacuum tube. The cathode rays are deflected from their straight-line path by both electric and magnetic fields. The direction of deflection shows that they are negatively charged particles. 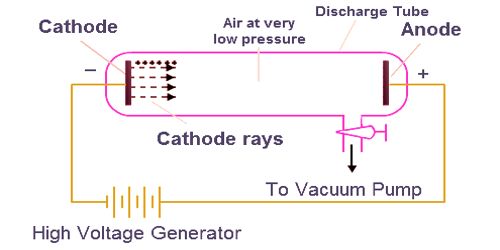 Cathode rays have the following properties: The properties of the cathode rays do not depend on the electrodes and the gas used in the vacuum tube.

A cathode-ray tube is a device that uses a beam of electrons in order to produce an image on a screen. The most popular commercial application of cathode ray technology is in the form of traditional television sets and computer monitors, although these are being supplanted by newer displays such as OLED. Food and Drug Administration regulations in 21 CFR 1020.1 are applicable to CRT emissions. They limit CRT radiation exposure to 0.5 mR/hr at a distance of two inches.