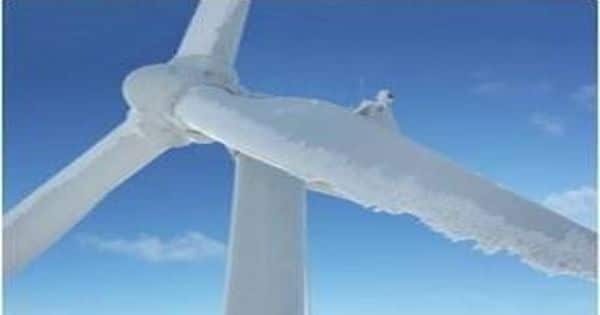 UBC Okanagan is helping to make winter air travel better. New UBC Okanagan study is transforming the way aircraft and wind turbine operators approach the threats associated with ice build-up. Professor Mohammad Zarifi and his colleagues are trying to improve the way aircraft and wind turbine operators deal with the build-up of ice. In a follow-up analysis published earlier this year, Assistant Professor Mohammad Zarifi and his team at UBCO’s Okanagan MicroElectronics and Gigahertz Applications (OMEGA) Lab have extended the scope and usefulness of their ice sensors.

New research is changing the way aircraft and wind turbine operators are addressing the risks related to ice build-up. A team has broadened the scope and functionality of their ice sensors.

Ice build-up on aircraft and wind turbines can impact the safety and efficiency of their systems, he notes. “We received a great deal of interest from the aviation and renewable energy industries stemming from our initial findings which pushed us to expand the boundaries of the sensor’s responsiveness and accuracy,” explains Zarifi.

In his most recent study, Zarifi says that they have worked to enhance the real-time response of the sensors to assess frost and ice build-up. “The sensors can identify in real-time these accumulations while calculating the rate of melting. This is crucial data for aviation, for keeping flights on time, and renewable energy applications.” In this latest study, the researchers focused on enhancing the real-time reaction of the sensors to frost and ice build-up. Ses accumulations can be detected in real-time by the sensors when measuring the melting rate. These are vital data for transportation, for holding flights on track, and for applications for clean energy, says Zarifi.

“Power generation output of wind turbines diminishes as a result of ice accumulations,” he adds. “So, the industry sees great promise in sensing and de-icing solutions that can mitigate those reductions in efficiency.”

Zarifi says that the proprietary sensor, which contains a protective coating, is now being tested by the aviation industry through a stringent approval process. This has to be achieved so it can become a permanent fixture for aircraft. He states that the newly announced support from the Department of National Defense would enable his team to continue developing the capabilities of the sensor. The initiative has also secured new funds from the Department of National Defense.

Zarifi is now partnering with a range of wind turbine firms to tailor the sensors to the wind turbines. The application of the wind farm is a much more simple proposition, he notes, since the sensors can be mounted at the same blade altitude without needing to be mounted on the blades—this avoids certain variables of measurement related to motion.

In the middle of these breakthroughs, the researchers first discovered the science of ice sensing. Their new invention will make use of the salty ice that freezes at colder temperatures. Interest in recognizing and tracking the formation of saltwater ice is growing due to concerns related to saltwater ice on oil rigs and maritime facilities. Zarifi and his colleagues at OMEGA Lab are working on the implementation of microwave/radar-based technologies to overcome this problem.

The researchers have discovered another first when it comes to ice sensing technologies. Through integrating the antenna into the sensor, the effects can be communicated in real-time with the operator to fix the build-up. Their new invention will make use of the salty ice that freezes at colder temperatures. Zarifi and his colleagues at OMEGA Lab are working on the implementation of microwave/radar-based technologies to overcome this problem.

Zarifi says that his team is as enthusiastic as industry partners to see if their microwave and antenna, which have proved to be reliable and versatile, can be modified for a range of applications, including ice and moisture sensing.