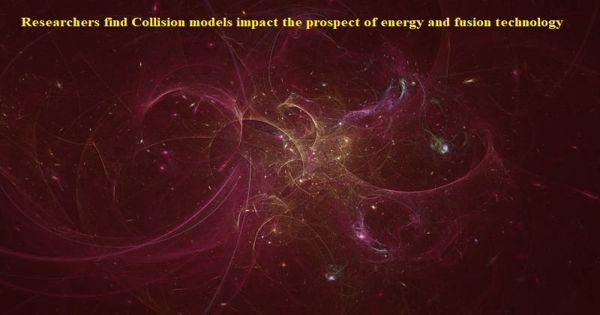 The Curtin research published in the journal Atomic Data and Nuclear Data Tables provides data to the International Thermonuclear Experimental Reactor (ITER)-one of the largest science programs in the world aimed at improving fusion energy for the generation of electricity on Earth.

Lead scientist, Ph.D. candidate, and Forrest Scholar Liam Scarlett from the Theoretical Physics Community at Curtin’s School of Electrical Engineering, Computational and Mathematical Sciences said that his measurements and the resulting collision database would play a key role in the advancement of fusion technologies.

“Our electron-molecule collision modeling is an exciting step in the global push to develop fusion power — a new, clean electricity source. Fusion is the nuclear reaction that occurs when atoms collide and fuse together, releasing huge amounts of energy. This process is what powers the Sun, and recreating it on Earth requires detailed knowledge of the different types of collisions that take place in the fusion plasma – that’s where my research comes in,” Mr. Scarlett said.

“We developed statistical equations and computer codes and used the Perth-based Pawsey Supercomputing Center to measure the likelihood of various reactions happening during molecular collisions. The molecules we looked at here are those produced by hydrogen atoms and their isotopes since they play an important role in fusion reactors.

“Until now the available data have been insufficient, but our molecular collision modeling has created an accurate and detailed database of more than 60,000 electron-molecule response probabilities which for the first time, has enabled a team in Germany to build an accurate model for molecular hydrogen in ITER plasma.

“This is significant because their model will be used to predict how the plasma will radiate, leading to a better understanding of the plasma physics, and the development of diagnostic tools which are vital for controlling the fusion reaction.” The research project was sponsored by the United States Air Force Office of Scientific Research as part of an international research initiative to harness fusion.

Study supervisor and co-author Professor Dmitry Fursa of Curtin’s School of Electrical Engineering, Computational, and Mathematical Sciences said the fusion power is appealing due to its nearly limitless availability of fuel (hydrogen) and the absence of long-lived nuclear waste or carbon emissions.

“Fusion is one of the major projects in the world right now. You can exploit an enormous amount of energy from the reaction that occurs when you take hydrogen atoms and fuse them together,” said Professor Fursa. “This new and comprehensive electron-molecule collision modeling has provided a solid basis for other researchers to continue their work into developing an efficient reactor to re-create the Sun’s fusion process here on Earth.”

Atlassian Launches a Jira for Every Team

Investment in Construction Automation is Essential to Rebuilding US Infrastructure