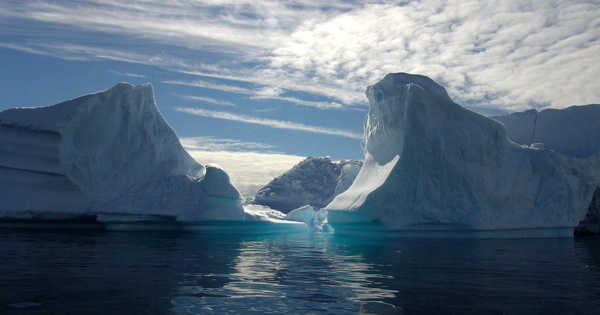 Researchers at the University of Birmingham have collaborated in an international project to identify how fluctuations in sea ice levels have interconnected with both algae blooms and weather events linked to El Nino over the past 12,000 years, according to a new study published in Nature Geoscience.

They discovered that Antarctic winds have a significant impact on the break-up and melting of sea ice, which in turn has an impact on the levels of algae, which can grow rapidly in surface waters when sea ice is reduced. Changes in algae growth levels in the waters surrounding Antarctica are significant enough to have an impact on the global carbon cycle.

A 170 m record of marine sediment cores extracted from Adélie Land in Antarctica is yielding new insights into the complicated relationship between sea ice and climate change.

The researchers examined the relationship between sea ice and large algae growth “bloom” events at annual timescales using techniques such as CT scan (computed tomography) imaging and analysis of microfossils and organic biomarkers. The findings, developed in collaboration with research institutes in New Zealand, Japan, France, Spain, and the United States, span the entire Holocene period and provide a highly detailed picture of these relationships, which can help predict future sea ice, climate, and biological interactions.

Prior to 4,500 years ago, algal bloom events occurred nearly every year, according to the researchers. However, after 4.5 thousand years ago, there was a baseline shift to less frequent algal blooms and the type of algal production, with bloom events responding to the El Nino Southern Oscillation (ENSO) and other climate cycles as sea-ice levels rapidly increased. Recent research by many of the same team associates the current increase in sea ice with the glacial retreat and the development of the Ross Ice Shelf, which acts to cool Antarctic surface waters, resulting in a “sea-ice factory.”

Dr. James Bendle, of the University of Birmingham’s School of Geography, Earth and Environmental Science, is a co-author on the paper. “While there is a clear relationship between rising Arctic temperatures and sea ice melting in recent decades, the picture is more complicated in the Antarctic,” he said. This is due to the fact that while some areas of the Antarctic are warming, others are seeing an increase in sea ice. Because sea ice reflects incoming sunlight, the warming effect is slowed, and algae are unable to photosynthesize as easily. Climate models currently struggle to predict observed changes in Antarctic sea ice, and our findings will assist climate researchers in developing more robust and detailed models.”

“The relationship we have observed between these changing conditions and the ENSO wind fields is particularly significant,” he added. We know that El Nino exacerbates the effects of climate change in some areas, so any insights linking this to Antarctic sea ice are fascinating and have implications for how future long-term loss of sea ice may affect food webs in Antarctic waters, as well as carbon cycling processes within this globally important region.”

The paper’s lead author is Dr. Katelyn Johnson of GNS Science in New Zealand. “While sea ice that remains in place year after year can prevent these large algal blooms from occurring, sea ice that breaks out and melts creates a favorable environment for these algae to grow,” she explained. These large algae ‘bloom events’ occur all over the continent, serving as the foundation of food webs, and act as a carbon sink.”

“Unlike in the Arctic, where rising temperatures have resulted in less sea ice, the relationship in the Antarctic is less clear, as is the resulting impact on primary productivity.” Our new record provides a longer-term view of how sea ice and climate modes such as ENSO influence the frequency of these bloom events, allowing climate modelers to develop more robust models.”

On a Flight With The Hurricane Hunters, View Hurricane Lan’s Eye

Viruses Found in 15,000-Year-Old Tibetan Glacier Ice are Like nothing seen before