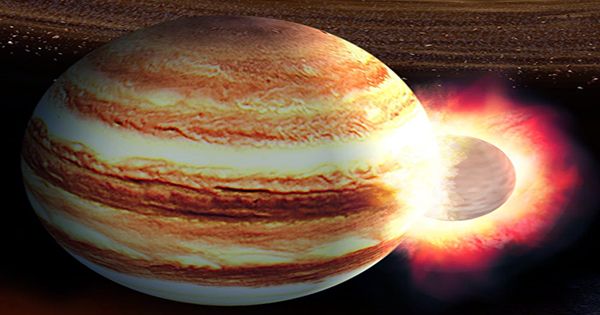 Many professional and amateur cameras on Earth are pointed at our Solar System, looking for hints and occurrences that can help us comprehend our planet’s past – and possibly our future. Even yet, it’s really satisfying when one of those cameras captures something completely unexpected because it’s looking in the right place at the right time to catch a glimpse of something unusual and spectacular. This is what happened this week, when numerous sensors on Earth captured a big object smashing into Jupiter on September 13.

The dazzling flash of what looked to be an impact in Jupiter’s upper atmosphere was captured by amateur photographers all across the world. If verified, this will be the seventh impact event on Jupiter since comet Shoemaker-Levy 9 smashed with the gas giant in 1994, making history as the first direct sighting of two bodies colliding in the Solar System. Jupiter’s gravitational effect being the largest planet in the Solar System means it is also the most impacted; yet, these collisions are rare.

Thankfully, amateur astronomers have their telescopes and cameras pointed to the sky, capturing the majority of the occurrences so far, including an asteroid or comet colliding with the gas giant in 2016 and an asteroid collision in 2019.

In fact, it was the 2019 collision that allowed scientists to calculate how frequently Jupiter is hit by a large enough object to cause a visible flash from Earth. Around 20-60 objects are expected to collide with the globe per year, therefore the fact that this is the eighth ever recorded indicates how infrequently we truly see these events.

Of course, half of these collisions occur on Jupiter’s far side and are brief, lasting only seconds before the space rocks vanish into Jupiter’s atmosphere, burning up in a fiery death and producing the recognizable flash of light. Other impact events, such as cloud disruption, are frequently obscured by the winds and swirling cloud layers around the giant planet if we miss the flash.

Jupiter’s strong gravitational pull may operate as a shield for Earth, vacuuming up any errant space debris that may be heading our way, while it’s also possible that it helps toss the rare asteroid or comet our way. Jupiter, on the other hand, appears to have taken one for the team this time, so thank you!