Blockchain technology is most simply defined as a decentralized, distributed ledger that records the provenance of a digital asset. Blockchain is the foundational technology that powers electronic currencies such as Cryptocurrencies. In simple terms, a Blockchain is an electronic ledger that can be shared among different users. A simple analogy for understanding blockchain technology is a Google Doc.  This helps in creating a record of transactions that cannot be altered. When we create a document and share it with a group of people, the document is distributed instead of copied or transferred. Each of these records is time-stamped and linked to the previous one.

So every time a new transaction is added to the ledger, it is stored as another block in the chain of transactions – hence the name. This creates a decentralized distribution chain that gives everyone access to the document at the same time. Blockchain is updated after the different parties contributing to the ledger agree. No one is locked out awaiting changes from another party, while all modifications to the doc are being recorded in real-time, making changes completely transparent. After new data is fed into a block, it cannot be erased. This makes technology verifiable and secure. By allowing digital information to be distributed but not copied, blockchain technology created the backbone of a new type of internet. 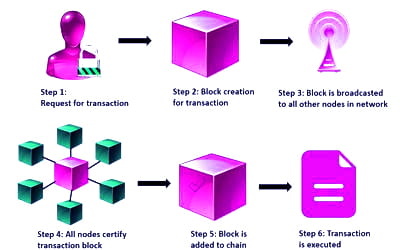 The technology uses decentralized consensus to maintain the network, which means it is not centrally controlled by a bank, corporation, or government. This validation of transactions helps companies reduce their costs as no third party has to be paid. Blockchain is an especially promising and revolutionary technology because it helps reduce risk, stamps out fraud, and brings transparency in a scaleable way for myriad uses. The system is very secure and there is no need for paying for centralized entities, as the technology is decentralized. This technology accounts for the issues of security and trust in several ways. Transactions are easier to track using Blockchain. Every transaction in this ledger is authorized by the digital signature of the owner, which authenticates the transaction and safeguards it from tampering.

One of the most important concepts in blockchain technology is decentralization. Since it is a shared and immutable ledger, the information in it is open for anyone and everyone to see. No one computer or organization can own the chain. Instead, it is a distributed ledger via the nodes connected to the chain. Hence, anything that is built on the blockchain is by its very nature transparent and everyone involved is accountable for their actions. Nodes can be any kind of electronic device that maintains copies of the blockchain and keeps the network functioning. In fact, the larger the network grows and becomes increasingly decentralized, the more secure it becomes. There is a rise in careers in Blockchain and it will create different job positions which are as follows: