Diamonds are highly coveted the world over, forming naturally in the Earth’s mantle under extreme temperature and pressure over billions of years. The creation of diamonds normally takes billions of years, gigantic pressure, and extremely hot temperatures. Beauty aside, diamonds are highly useful materials – especially within the realm of technology – due to their extreme hardness, high thermal conductivity, and quantum optical properties.

An international team of researchers has created diamonds at room temperature, in mere minutes, using extremely high levels of pressure. The researchers are hoping their discovery could lead to new ways of producing artificial diamonds at scale.

An international team of researchers has created diamonds at room temperature, in mere minutes, using extremely high levels of pressure. Scientist’s team, including from the Australian National University (ANU) and RMIT University, created two types of diamonds in a laboratory at room temperature within just a few minutes. The team ended up with two kinds of diamonds: a regular one you’d find on a piece of jewelry and a Lonsdaleite, which is an ultra-strong kind of diamond that is usually found at the site of meteorite impacts. ANU Professor Jodie Bradby said, “This breakthrough has defied nature to make diamonds in minutes in a laboratory at room temperature – a process that normally requires billions of years, huge amounts of pressure, and super-hot temperatures.”

“Natural diamonds are usually formed over billions of years, about 150 kilometers deep in the Earth where there are high pressures and temperatures above 1,000 degrees Celsius,” Australian National University professor Jodie Bradby said in a statement. 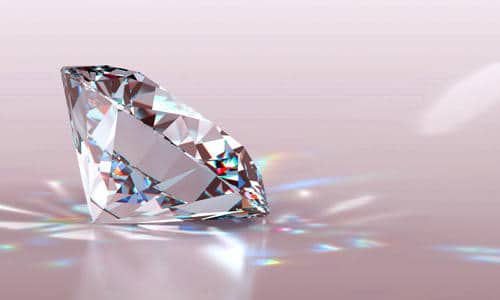 Using advanced electron microscopy techniques, scientists could capture solid and intact slices from the experimental samples to create snapshots of how the two types of diamonds formed. Usually, the process of creating artificial diamonds has involved extremely high temperatures — but the new methodology, detailed in a paper published in the journal Small this month, could allow for the creation of diamonds at room temperature as well. Co-lead researcher Professor Dougal McCulloch said, “Seeing these little ‘rivers’ of Lonsdaleite and regular diamond for the first time was just amazing and helps us understand how they might form.”

Here’s how it works: by using a “diamond anvil cell,” a device used to generate extreme amounts of pressure, the team crushed down on carbon atoms at the equivalent pressure of 640 African elephants on the tip of a ballet shoe.

The researchers are hoping their discovery could lead to new ways of producing artificial diamonds at scale. Lonsdaleite in particular could prove to be useful since it’s significantly harder than regular diamonds and has can used “used for cutting through ultra-solid materials on mining sites,” according to Bradby.

“The twist in the story is how we apply the pressure,” Bradby said. “As well as very high pressures, we allow the carbon to also experience something called ‘shear’ – which is like a twisting or sliding force. We think this allows the carbon atoms to move into place and form Lonsdaleite and regular diamond.”

The diamond found in these small veins is the same material that makes up the diamond gemstones but in very small quantities. This research is mostly focused on creating diamonds for industrial and scientific uses, and that means Lonsdaleite is the more interesting finding. Lonsdaleite is a hexagonal diamond and is theoretically much stronger than a “regular” diamond, which has a cubic lattice.