Quadrotor, a type of multi-rotor unmanned air vehicle, has gained prominence in the research community due to its high maneuverability, vertical take-off, landing and hovering capabilities, and ease of operation in areas where conventional unmanned air vehicles have proven to be ineffective. When the aircraft veers too high, a decrease in lift and an increase in drag can cause the vehicle to plunge unexpectedly. Identified as a stall, this occurrence has caused many drones manufacturers to err on the side of excessive caution when preparing autonomous flight movements for their aircraft.

For vertical take-off and landing tail-sitter drones, most manufacturers program aircraft in such a way that the vehicle body rotates very slowly as it passes from hover to forward flight and vice versa. Drones run the risk of stalling in mid-air as they are forced to veer upwards too quickly. The increase in drag and the decrease in lift caused by this complex movement necessitates proper planning of autonomous flight operations by drone manufacturers.

US Army Developing Algorithms to Improve Quadrotor Drone In-Flight Performance. The goal of this work was to use a model-based trajectory planner that could capture the quadrotor’s dynamic characteristics sufficiently while executing quickly enough to provide trajectories in-flight.

The U.S. Army Military Capabilities Development Command now referred to as DEVCOM, Army Research Laboratory has partnered with researchers at the Rensselaer Polytechnic Institute to develop a trajectory planner that greatly shortens the time it takes for VTOL tail-sitter drones to make this vital transition.

The trajectory planner program is programmed to determine the optimal flight sequence for these transformations so that they can be done in record time, said Dr. Jean-Paul Reddinger, Army Aerospace Engineer and the Vehicle Technology Division of the laboratory. The team developed a trajectory planner especially for the Army’s Popular Testing Configuration Tool, a quadrotor biplane tail-sitter used to test experimental design features and to study fundamental aerodynamics. 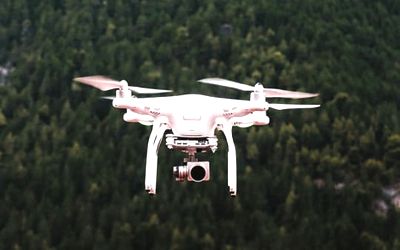 “The goal of this work was to use a model-based trajectory planner that could capture the quadrotor’s dynamic characteristics sufficiently while executing quickly enough to provide trajectories in-flight,” said Dr. Jean-Paul Reddinger, Army aerospace engineer at the laboratory’s Vehicle Technology Directorate. “We’re essentially building in a kinesthetic model of the aircraft’s own dynamics that it can reference.”

According to Reddinger, VTOL tail-sitters normally depend on a heuristic method whenever they move from hover to forward flight, where they adopt a very sluggish yet very stable preset collection of behavior. On the other hand, the trajectory designer will find the optimal sequence of flight motions for these transitions tailored to each case.

Researchers found that these more agile movements were available when they modeled the peculiar relationship between the wake of the vehicle’s rotors and the aerodynamics of its wings. “If this vehicle is hovering, the wings are pointed upwards and the rotors are spinning above it constantly; if you wanted to start moving it forward, you would be dragging this wing effectively flat against the air,” Reddinger said. “You would think that this causes a lot of drag, but in reality, because of the air being blown down onto the wing, it’s actually not seeing a whole lot of drag.”

As a result of this extra downwash of the rotors, VTOL tail-sitters can accommodate a more violent transition between hover and forward flight than one would have expected, Reddinger said. Via simulation, the researchers found that the integration of the wind wake rotor into the trajectory planner made it possible for the CRC to travel to hover and land in half as much time as the traditional method.

The team believes that the trajectory planner may gradually allow the CRC to intelligently turn between hover and forward flight as it navigates through dense or urban areas. “Right now, it’s at a state where you give it the initial state that you want — maybe you have a specific altitude or velocity that you’re starting at — and it will plot a path that gets you from that initial state to the desired final state as efficiently as possible,” Reddinger said. “The direction we’re trying to take this in is to incorporate obstacles and additional kinds of constraints on its maneuverability.”

Reddinger contrasted the autonomous actions of the CRC with that of humans, and how an understanding of our own capacities enables us to travel quickly from one place to another.  Similarly, the introduction of more advanced flight simulations into the trajectory planner would provide the CRC with a greater view of the fluid aerodynamic system as it flies. “For instance, if there was a building in the way, does it make more sense to fly over the building or around the building?” Reddinger asked. “Do you want to transition to build up speed and then transition back or do you just stay in hover mode? There’s a range of possibilities, and the idea is to always be picking the best one.”

Once the trajectory planner undergoes further simulation testing, the researchers intend to connect the program to the hardware models to ensure a high degree of robustness prior to the start of the flight tests. Reddinger claims that a quicker, more effective transition between hover and forward flight would potentially help the Army build new aircraft for intelligence, surveillance, and reconnaissance missions as well as aerial re-supply operations.

“In order to capitalize on the flight capabilities of the emergence of novel configurations, we need autonomous pilots that are capable of making the most of the agility and performance that these aircraft are designed to allow,” Reddinger said. “This method of model-based trajectory planning is a step in the direction of integrating high-level autonomy with platform-specific dynamics.”