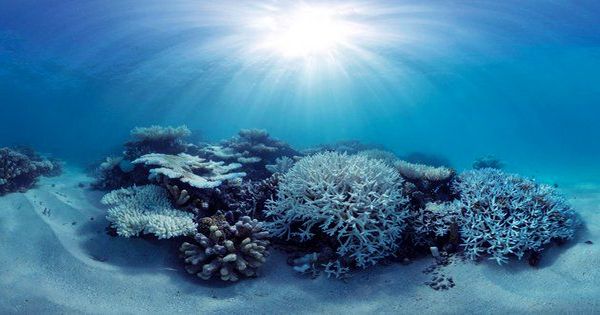 Following recent news that Australia’s Great Barrier Reef saw its third coral bleaching incident in five years, but experts say it’s not “all bad news”, scientists at James Cook University now say it’s probably more serious than previously thought, even the most widespread. This is the fifth reef bleaching incident in the last 20 years and it is clear that they are becoming more frequent. The first occurred in 1998 and the second in 2002. The third, in 2016, caused incredible damage to the northern part of the Barrier Reef. Bleaching in 2017 caused widespread damage to the central region of the reef, making it the hardest hit. This latest has not affected any large areas.

Professor Terry Hughes University, director of James Cook’s ARC Center of Excellence, said in a statement, “We surveyed 1,036 reefs from the air over the past two weeks in March to measure the amount and intensity of coral bleaching across the Barrier Reef region.” “For the first time, all three regions of the Great Barrier Reef have experienced severe bleaching in large parts of the northern, central, and southern sectors.” The long-term effects of this new bleaching event will not be known for some time. Bleaching is not a continuous coral death but prolonged and multiple events can easily occur. In 2016, half of all shallow-water corals in the northern region of the Great Barrier Reef died.

Professor Morgan Pratchett, also from ARC’s CoE for Coral Reef Studies, who led the underwater surveys to assess the bleaching said, “Bleaching is not necessarily fatal and it affects some species more than others. A pale or lightly bleached coral usually returns and survives within a few weeks or months.” “We will be back underwater later this year to assess coral damage from this most recent incident.” Coral bleaching events of this magnitude occur due to thermal stress on the animal. The reason behind the unexpected thermal stress is the sudden increase in sea temperature due to abnormal heat. As temperatures have risen significantly during the ongoing climate crisis and El Niño incidents have reached more extreme proportions, the number, frequency, and intensity of bleaching incidents are not surprising.

Prof Hughes said, “Of the five events we’ve seen so far, only 1998 and 2016 took place in El Nino. As the summers get hotter and hotter, we don’t need El Niño events to cause mass explosions on the scales of the Great Barrier Reef.” “We’ve already seen the first example of back bleaching from behind – in the summer of 201 and 2017 respectively.” Only a small number of reefs survived the three bleaching events and are located far from the coast in both remote areas north and south of the Great Barrier Reef.

Latest UN Climate Report Is an Atlas of Human Suffering