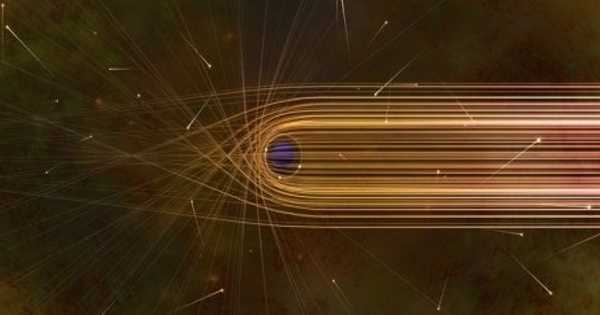 Space is so warped in the vicinity of black holes that even light rays may curve around them several times. This phenomenon may allow us to see multiple versions of the same thing at the same time. While this has been known for decades, we now have an exact mathematical expression thanks to Albert Sneppen, a Niels Bohr Institute student. The findings, which are even more useful in realistic black holes, were recently published in the journal Scientific Reports.

You’ve probably heard of black holes, those incredible masses of gravity from which not even light can escape. You may have also heard that space, and even time, behave strangely near black holes; space is warped.

Space curves so much in the vicinity of a black hole that light rays are deflected, and very nearby light can be deflected so much that it travels several times around the black hole. As a result, when we observe a distant background galaxy (or another celestial body), we may be lucky enough to see the same image of the galaxy multiple times, albeit increasingly distorted.

In the vicinity of black holes, space is so warped that even light rays may curve around them several times. This phenomenon may enable us to see multiple versions of the same thing.

The working mechanism: A distant galaxy shines in all directions; some of its light approaches the black hole and is lightly deflected; some light approaches even closer and circumvolves the hole once before escaping down to us; and so on. When we look near the black hole, we see more and more versions of the same galaxy as we get closer to the hole’s edge.

How much closer to the black hole must you look from one image to the next? The answer has been known for over 40 years and is approximately 500 times (for mathematicians, it is more precisely the “exponential function of two pi,” written e2π).

Calculating this is so difficult that we had not yet developed a mathematical and physical intuition as to why it happens to be this exact factor until recently. Albert Sneppen, a master’s student at the Cosmic Dawn Center, a basic research center affiliated with both the Niels Bohr Institute and DTU Space, has now succeeded in proving why.

“It’s fantastically beautiful to finally understand why the images repeat themselves in such an elegant way. Furthermore, it opens up new avenues for testing our understanding of gravity and black holes “Albert Sneppen elucidates.

Proving something mathematically is not only satisfying in and of itself; it also brings us closer to comprehending this wondrous phenomenon. Because the factor “500” is directly related to how black holes and gravity work, the image repetitions can now be used to examine and test gravity.

Sneppen’s method can also be generalized to apply not only to “trivial” black holes, but also to rotating black holes, which is a completely new feature. Which, in fact, is what they all do.

Because each new image requires looking 500 times closer to the black hole, the images are quickly “squeezed” into one annular image. In practice, the numerous images will be difficult to distinguish. However, when black holes rotate, there is more room for “extra” images, so we can hope to confirm the theory experimentally in the not-too-distant future. This way, we can learn not only about black holes, but also about the galaxies that surround them:

The more times light has to travel around the black hole, the longer it takes, and the images become increasingly “delayed.” If, for example, a star explodes as a supernova in a background galaxy, this explosion would be visible repeatedly.