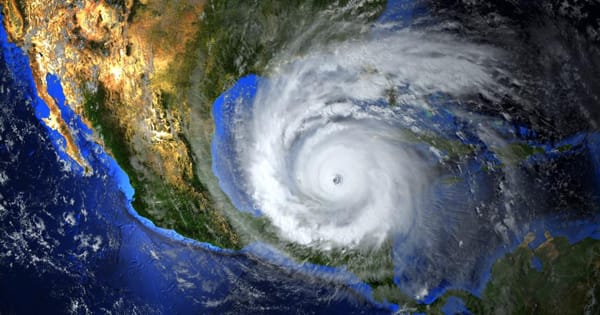 When Hurricane Maria came into Puerto Rico in September 2017 as a high-end category 4 storm, it left behind the island’s worst disaster in its history. Along with the human toll, the disaster had an impact on the entire island’s wildlife, including a troop of free-roaming rhesus macaques who lived on the isolated Cayo Santiago island near Puerto Rico. Now, a group of scientists has released one of the first findings indicating that natural disasters may have molecularly accelerated aging in monkey immune systems.

In its immediate aftermath, the storm killed over 3,000 people, knocked out power to virtually all of the island’s 3.4 million population, and inflicted more than $100 billion in damage. What was the long-term impact of this stress and adversity on its population’s health? And may being exposed to harsh weather occurrences hasten the aging process?

“While everyone ages, we don’t all age at the same rate, and our lived experiences, both positive and negative, can influence how quickly we age. Surviving an intense incident might cause persistent inflammation and the early beginning of several age-related disorders, such as heart disease “According to corresponding author Noah Snyder-Mackler, an assistant professor in the School of Life Sciences at Arizona State University. “However, we still don’t know exactly how these events become lodged in our bodies, resulting in detrimental health impacts that may not manifest themselves for decades after the incident occurs.”

While the final toll on the survivors’ mental and physical health has yet to be determined, a team of biologists lead by Snyder-Mackler has turned to one of our closest evolutionary cousins for the first hints. The damage affected all of the island’s fauna, including a colony of free-roaming rhesus macaques living on the isolated Cayo Santiago island near Puerto Rico. The animals have been living on the island since 1938, when the Caribbean Primate Research Center field station was established.

Now, the ASU team, led by Snyder-Mackler and lead author Marina Watowich—a graduate student at the University of Washington and research scientist at ASU—and their collaborators at the Caribbean Primate Research Center, the University of Pennsylvania, the University of Exeter, and New York University, have published (will include DOI) one of the first findings that natural disasters may have molecularly accelerated aging in the monkeys’ immune systems.

Our findings show that changes in immune cell gene expression in individuals exposed to an extreme natural disaster were equivalent to the effects of natural aging. We also found signs of accelerated biological aging in samples taken from animals following Hurricane Maria.

As a category 4 hurricane, Maria wreaked havoc on Cayo Santiago’s natural habitat and research infrastructure. Surprisingly, only 2.75 percent of the macaque population died as a result of the storm. And there was no difference in survival one year after the hurricane. Was the health of hurricane survivors harmed in any other way?

People of the same chronological age—the number of years since birth—may develop disease at different times and in different ways. It is commonly known that persons who have had highly negative experiences are more likely to acquire heart disease and other ailments that are more common in older people. It is yet unknown how these negative experiences ‘get under the skin’ to induce disease. One theory is that this effect is caused by tremendous adversity ‘aging’ the body. People’s biological ages can differ, as determined by molecular markers inscribed in our DNA, immune systems, and physiology.

The researchers discovered that the hardship caused by the hurricane may have hastened the aging of the immune system after carefully examining the genes expressed in the macaques’ immune cells. “On average, monkeys who survived the hurricane had immune gene expression profiles that were 2 years older, or approximately 7-8 years of human longevity,” Watowich added.

Cayo Santiago, a 15.2-hectare island one kilometer off the southeastern coast of Puerto Rico, is home to a population of 1,800 free-roaming rhesus macaques that have been studied for nearly a century.

“Cayo Santiago was the first region of Puerto Rico to be hit by Hurricane Maria, and it absorbed the full brunt of the category 4 storm,” Snyder-Mackler explained. “The hurricane wrecked homes and infrastructure throughout Puerto Rico, and on Cayo Santiago, it killed most of the vegetation, as well as the water cisterns and research infrastructure required to keep the field station operational.”

The rhesus macaques have many behavioral and biological characteristics with humans, including how their bodies age, yet their lifetime is one-quarter that of ours. The scientific team recognized that by examining the macaques, they might gain estimates of aging in years rather than the decades found in comparable human studies.

Marina Watowich and the rest of the team were able to use a collection of blood samples and a history of extensive demographic data from age-matched subsets of the Cayo Santiago rhesus macaque community to assess how Hurricane Maria affects immune cell gene regulation and aging.

The downregulation of so-called heat shock genes, which promote the normal function of protein synthesis in human cells, was the most impacted, with some having two-fold lower activity after Hurricane Maria. These genes have also been linked to heart disease and Alzheimer’s disease.

Surprisingly, they discovered a substantial link between storm exposure and aging effects on gene expression, with the effect of the hurricane being similar to the effect of the immune system aging. They looked at profiles from single-cell RNA sequencing to identify genes that are preferentially expressed in important immune cell types to understand how the hurricane may have changed levels of immune cell populations.

“Cell-specific markers of canonical pro-inflammatory immune cells, such as CD14+ monocytes, were found to be more abundant in older people and those who had been affected by the hurricane. Furthermore, the expression of helper T-cell genes, which are anti-inflammatory cells, dropped in older animals and those exposed to the hurricane. This could mean that animals have increased inflammatory activity following a storm, comparable to what we see in elderly people” Snyder-Mackler stated.

Getting under the skin

They had four years of data prior to Hurricane Maria (n = 435) and one year after Hurricane Maria (n = 108) from their long-term research, which were part of a collaboration with the Caribbean Primate Research Center, the University of Pennsylvania, the University of Exeter, and New York University. They believed that being exposed to the hurricane would cause molecular alterations similar to those seen in the natural aging process.

“Our findings show that changes in immune cell gene expression in individuals exposed to an extreme natural disaster were equivalent to the effects of natural aging,” Snyder-Mackler said. “We also found signs of accelerated biological aging in samples taken from animals following Hurricane Maria.”

“Most importantly, we find a fundamental mechanism-immune cell gene regulation-that may explain how hardship, particularly in the setting of natural disasters, may eventually ‘get under the skin’ to promote age-related illness development and progression,” Watowich added.

Surprisingly, not all monkeys reacted the same way to the hurricane. Some monkeys’ biological ages, for example, increased more faster than others. The researchers suggest that other features of the monkey’s surroundings may influence their response to hardship.

For example, much as in people, social support is an important part of being able to cope and deal with hardship. It’s likely that monkeys who had more social support after the storm were better able to overcome any negative effects—something the team plans to look into soon. The study did have certain drawbacks, the most notable of which was the inability to measure aging rates in the same individuals before and after the hurricane.

They anticipate that future research will involve longer-term examinations of every individual within a population to understand more about the interaction of biological aging, hardship, and social structures in the midst of a natural disaster.

Finally, they hope that their findings will spur efforts to build a better understanding of aging and adversity, and perhaps one day, a viable mitigation plan to reduce the toll of natural catastrophes.