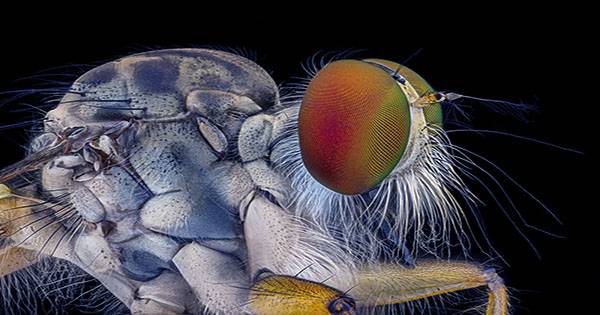 “Nikon Small World was intended to demonstrate how art and science collide beneath the microscope to the rest of the world. In a statement, Eric Flem, Communications Manager at Nikon Instruments, said, “This year’s first prize winner could not be a greater example of that combination.”

Jason Kirk won the top award this year for his photograph (above) depicting the microscopic workings of a southern live oak leaf, including its trichomes, stomata, and arteries. Trichomes (white) are hair-like structures that aid in plant protection. Stomata (purple) are tiny pores that allow carbon dioxide, water vapor, and oxygen to pass through the plant, whereas vessels (cyan) just transfer water throughout the leafy plumbing.

No pun intended, capturing this kind of image is no easy task. Jason captured this image with a custom-built microscope device that stacked 200 distinct photographs of the leaf together. To emphasize all three planet formations, a sophisticated configuration of both transmitted and reflected light was required. After that, the image was altered in post-production to bring out these aspects even more. “The lighting side of it was complicated,” said Jason, who is also the director of Baylor College of Medicine’s Optical Imaging & Vital Microscopy (OiVM) Core.

“Microscope objectives are small, and the depth of focus is quite shallow. I couldn’t just put a big lamp next to the microscope and have directional lighting. It’d be like attempting to light a pin’s head with a light source the size of your head. “It’s almost impossible.”

Esmeralda Paric and Holly Stefen received the second place for their cosmic image (above) depicting hundreds of thousands of networking neurons.

The minuscule image, which appears to be something you’d see via a telescope, really displays a microfluidic device with roughly 300,000 networking neurons divided into two regions. Axons can be observed spanning the gap between the two portions. Frank Reiser won third place for his razor-sharp depiction of a hog louse’s claw and innards (see above).

The remaining top 10 photographs chosen by this year’s judging panel, which includes science communicator, author, and YouTuber Hank Green, may be found below.

Deepfakes Could Be Detected Via The Reflections In Their Eyes

Canon Takes another Stab at the Mirrorless Market, With R7 and R10