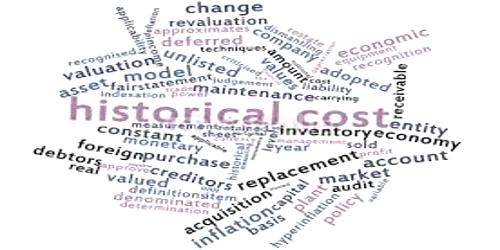 Historical cost is the original cost of an asset, as recorded in an entity’s accounting records. It is the preferred method of valuing assets because it can be proven. For example, a House purchased in 1990 at cost of $100,000 and still owned by the buyer will be reported on the buyer’s balance sheet at its cost or historical cost of $100,000 even though it’s present cost, replacement cost, and the inflation-adjusted cost is much higher today.

A significant benefit of historical cost idea is that the records kept on the basis of it are considered reliable, equivalent, provable and consistent.

Historical costing can be of the following two types of nature:

(i) Post Costing: Post costing means ascertainment of cost after the production is completed. This is done by analyzing the financial accounts at the end of a period in such a way so as to disclose the cost of the units which have been produced.

For instance, if the cost of product A is to be calculated on this basis, one will have to wait till the materials are actually purchased and used, labor actually paid and overhead expenditure actually incurred. This system is used only for ascertaining the costs but not useful for exercising any control over costs, as one comes to know of things after they had taken place. It can serve as guidance for future production only when conditions in the future continue to be the same.

(ii) Continuous Costing: In Case of this method, the cost is ascertained as soon as a job is completed or even when a job is in Progress. This is done usually before a job is over or a product is made. In the process, actual expenditure on materials and wages and share of overheads are also estimated. Hence, the figure of cost ascertained in this case is not exact. But it has an advantage of providing cost information to the management promptly, thereby enabling it to take necessary corrective action on time. However, it neither provides any standard for judging current efficiency nor does it disclose what the cost of a job ought to have been.

Allocation and Apportionment of Overheads

Concept of Opportunity Cost with Example