The three laws of planetary motion are: 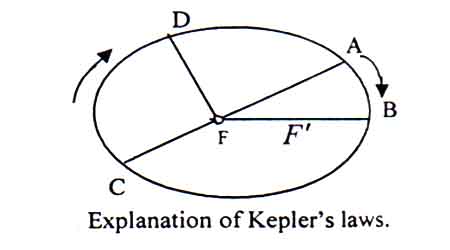 1st law: ABCD is an elliptical orbit. F and F’ are the two foci. According to the 1st law, the orbit of the planet is elliptical with the sun, as it’s one of the foci.

2nd law: Let the sun is at the focus F. If a planet takes time t coming from A to B, then it will take the same time to come from C to D.

Therefore, according to 2nd law,

Area of AFB = area of CFD

3rd law: Since the planets orbiting the sun in an elliptical orbit, so the distance of a planet will be different for different time.

Let the average distance of a planet from the sun = R and the planet take T time to round the sun once.