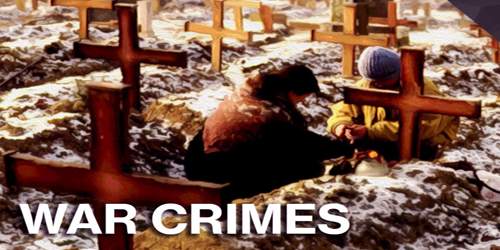 War crimes are acts that seriously violate the laws of war that give rise to individual criminal liability. In international crime, war crimes are serious violations of the laws or customs of war as defined by international law and international treaties. War crimes and crimes against humanity are among the most serious crimes under international law. Examples of crimes include the intentional killing of civilians or detainees, torture, destruction of civilian property, hostage-taking, rape, use of child soldiers, assault, declaring that no quarter will be paid, and the necessity to seriously violate discrimination, proportionality, and military policy.

Although the prohibition of certain behaviors in the conduct of armed conflict has been held for centuries, the concept of war crimes developed especially in the late nineteenth and early twentieth centuries, when international humanitarian law, known as armed conflict law, was adopted. The term war crimes are difficult to define accurately, and its use has continued to evolve, especially since the end of World War I. The first systematic attempt to define a wide range of war crimes was under the direction of the military government, issued by US President Abraham Lincoln during the United States Civil War, and in 1863 by the United States. The Geneva Conventions of 1864 and later Geneva Conventions, particularly the four 1949 Geneva Conventions and the two Additional Protocols of 1977, focus on the protection of individuals who do not host or participate in hostilities. However, there is no document in international law that proves all war crimes. The list of war crimes is found in international humanitarian law and treaties under international criminal law, as well as in international customs law. This most famously happened in 1960, when Israeli agents were involved in the organization of concentration camps in Argentina and the principles of the Holocaust by high-ranking Nazi Adolf Aichman.

The next major effort to try war criminals took place in Europe and Asia after World War II. Throughout the war, the Allies referred to the atrocities committed by Adolf Hitler’s Nazi government and announced their intention to punish those responsible for the war. However, during World War II, the Allies were persuaded by Nazi Germany to prosecute those believed to be guilty of the murder of millions of people – mainly Jews, and the mistreatment of civilians and prisoners of war by the Japanese. The Moscow Declaration of 1943, issued by the United States, Great Britain, and the Soviet Union, and the Potsdam Declaration of 1945, published by the United States, Great Britain and China (and later adhered to by the Soviet Union) to punish war crimes committed by the German and Japanese governments, respectively. Numerous trials of Axis war criminals established the Nuremberg Principles, such as the idea that war crimes constituted crimes defined by international law. Furthermore, the Geneva Conventions of 1949 defined new war crimes and established that states could exercise universal jurisdiction over such crimes. Persecution on the grounds of political, ethnic, or religious persecution involves the enforcement of any offense committed within the jurisdiction of the tribunal in violation of the internal law of the country or any related offense. After the formation of several international courts in the late 20th and early 21st centuries, the definition of additional crime applicable to armed conflict, except in states such as civil war, was defined.