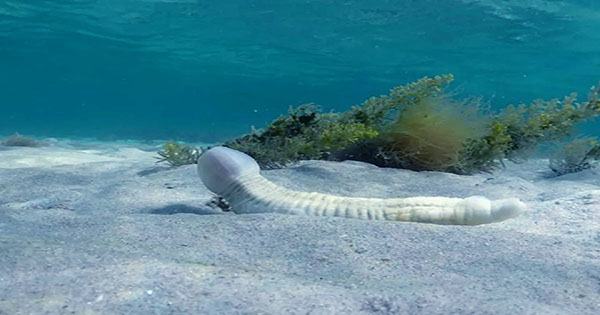 It is good thing animals do not recognize the names we give them, and penis worms are no exception (Priapulida). After all, they were here 530 million years before us and our genitalia, they may claim.

Penis worms did not just hang around in the sea looking phallic; they devised a way for evading predators that has since made famous by hermit crabs. Penis worms (not to be confused with penis fish) first emerged during the Cambrian era, but unlike most other strange-looking organisms, they survived and have not altered much since.

While other invertebrates, such as arthropods, have evolved dramatically, penis worms have just stuck to what works, unconcerned about what humans think.

Penis worms do not fossilize well after having had a “no bones day” for half a billion years. Nonetheless, they were so numerous and typically lived in environments that were well adapted to the formation of fossils that we have evidence of their presence in locations like China’s Guanshan deposits.

A recent research published in Current Biology has disclosed four specimens from Guanshan, as well as the shells in which they discovered, implying that they lived millions of years before hermit crabs.

Four penis worms of the species Eximipriapulus found inside hyolith (bottom-dwelling conical shell builders) shells, according to Dr. Martin Smith of Durham University and co-authors. One may have been a coincidence, but the other four could not be, especially because no Eximipriapulus has discovered outside of shells in the region. In a statement, Smith said, “The worms are constantly sitting snuggly within these same sorts of shells, in the same position and orientation.” “The only plausible explanation was that these shells were their houses, which was a complete surprise.”

Hermit crabs show that inhabiting other people’s shells may be a smart method to avoid predators without having to go to the expense of creating your own. Other specimens date back to the mid-Jurassic, but Smith and co-authors taken aback by the penis worms’ early need for protection. “There was nothing alive more complicated than seaweeds or jellyfish not long before these species evolved,” Smith added. “It’s perplexing that we find the sophisticated and deadly ecologies generally associated with much younger geological periods so soon after the first complex creatures appear.”

Penis worms were predators in and of themselves, but the scientists discovered that at less than an inch long, there were enough of predators higher up the food chain in the Guanshan environment to threaten them. The threat of predation altered the conduct of people who hunted. This is an unusual occurrence of Cambrian behavior preserved in fossils, according to the research. The discovery, together with the recent discovery of communal tube building in the Burgess Shale, implies the Cambrian was more contemporary than previously thought.

The Most Intelligent Trash Can Thieves Are Quieter Raccoons