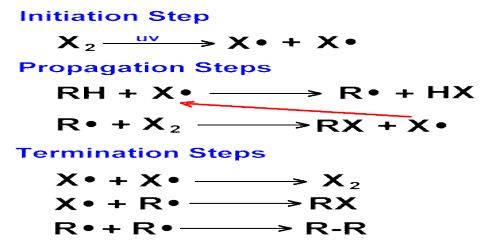 There are many chemical reactions which proceed so swiftly that the reactions are completed within a fraction of a second. These reactions result in explosions. A familiar example is the explosive reaction when the mouth of a test tube filled with hydrogen gas is held near a flame. Hydrogen and oxygen of air combine to form water which condenses. Such explosions are believed to take place as a result of chain branching.

Another type of explosions, known as thermal explosions, take place if a highly exothermic reaction is carried out in a confined space from which heat cannot be dissipated. The heat evolved during the reaction increases the temperature, thereby increasing the rate of the reaction very rapidly and ultimately causing an explosion. There are many chemical reactions that will release energy . These are known as exothermic reactions. If the reaction proceeds slowly, the released energy will be dissipated and there will be few noticeable effects other than an increase in temperature. On the other hand, if the reaction proceeds very rapidly, then the energy will not be dissipated.

In an ordinary chain reaction each propagating step leads to the formation of a molecule of product and a chain carrier. If more than one chain carrier is produced from the original active species then the chain is said to branch. Each new carrier now can propagate its own chain so that the number of chain carriers multiplies rapidly.