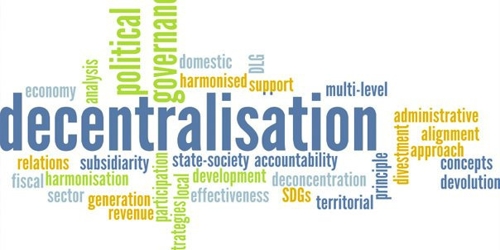 Transfer of decision-making power and assignment of accountability and responsibility for results. It is a form in which managers at the lower levels have more authority to make decisions regarding their particular operation. It is accompanied by a delegation of commensurate authority to individuals or units at all levels of an organization even those far removed from headquarters or other centers of power. It refers to a company’s top management delegating authority to subunits of the company. Subunits include divisions, subsidiaries, profit centers, investment centers, and so on.

A decentralized system is one which requires multiple parties to make their own independent decisions. It is the movement of departments of a large organization away from a single administrative center to other locations. A benefit of decentralization is having the decision makers closer to the markets in order to make better and faster decisions.

In such a decentralized system, there is no single centralized authority that makes decisions on behalf of all the parties. Instead, each party, also called a peer, makes local autonomous decisions towards its individual goals which may possibly conflict with those of other peers. Peers directly interact with each other and share information or provide service to other peers.

How to measure the performance of a manager of a Profit Centre?

How does opportunity cost enter into the make or buy decision?