Home Physics Explain Defects of Vision and its Remedy

Cause: This defect may be caused if the radius of the eye ball increases or if the focal length decreases for any reason and thereby increases the power of convergence of the eye lens. [Fig. a]

Effects of such problem: In this case, rays of light coming from any object placed at large distance, after refraction through the eye lens converge to a point I in front of the retina (Fig. a).

As a result, objects are not seen distinctly. For this kind of eye, the far point is not situated at infinity. Rather, it is a certain finite point F. For this reason, such type of eye cannot see object distinctly placed beyond F (Fig b]. 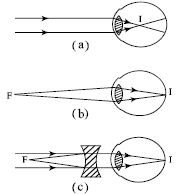 Therefore, to rectify short sight, a concave lens or spectacles should be used as aid lens in front of the eye. They should have such focal length or power so that due to refraction through the image of an object placed at infinity the image is formed at the far point of the defective eye [fig. c].

We know that when the object is at infinity its virtual image is formed at the principal focus of the concave lens. Therefore, the focal length of the concave lens used as spectacles should be equal to the distance of the far point of the defective eye.

2. Long sight or hypermetropia: If any eye has this type of defect, it can see distant objects distinctly but cannot see near objects distinctly. Effect of such problem: In such a case, rays coming from the object placed at the near point of a normal eye, after refraction through the eye lens converge to a point I behind the retina [Fig. a].

As a result, the image becomes blurred. The near point N of such an eye shifts away to 0, which is more than 25 cm (the distance of the near point for a normal eye). Therefore, such a defective eye cannot see any objects distinctly, which is placed nearer to 0 [Fig b]. 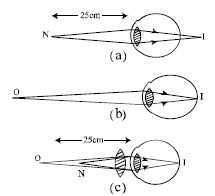 We also know that only a convex lens can provide a virtual and erect image at a distance greater than that of the object. For this reason, a convex lens of suitable focal length or power is used in this case as aid lens or spectacles in front of the eye. The focal length of this lens should be such so that due to the refraction the virtual image of an object placed at normal near point N, is formed at the near point 0 of the defective eye. [Fig c]