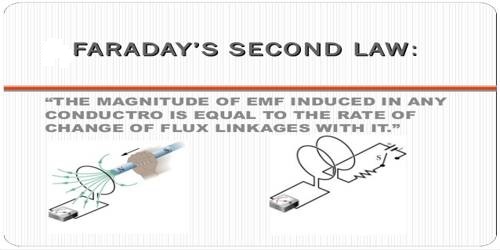 Second law: The value of the Induced electromotive force in the coil is directly proportional to the rate of change of the number of magnetic field lines or magnetic flux.

Explanation: Faraday’s second law states that the mass of two substances that are liberated from electrodes, given the same applied electrical charge, is proportional to the molecular weights of the two substances.

If the induced electromotive force is E, then from second law, we get,

Here K is a proportionality constant whose value depends on the unit measurement. If φ is expressed in Weber, ‘t’ in second and induced electromotive force in volt, i.e., if physical quantities are expressed in S. I. unit, then K = 1.

This law can be expressed by calculus. If in time dt, the change of flux is dφ, then

If there are N number of turns in the coil, then,

Newmann gave the mathematical form of the second law of Faraday. So it is known as Newmann’s law.

Cycle of Magnetization and Hysteresis