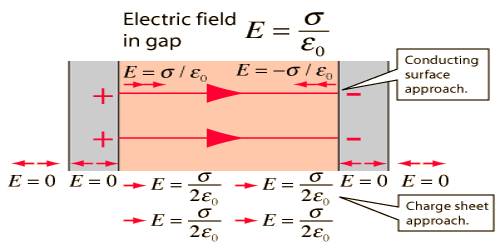 Consider a thin plane infinite sheet having positive charge density σ. In order to find the electric field intensity at a point p, which is at a perpendicular distance r from the plane shell, we choose a closed cylinder of length 2r, whose ends have an area as the Gaussian surface.

Let M and N be two parallel charged conductors [Figure]. The sheet M is positively charged and the sheet N is negatively charged and are charged with the same density. The charge density of both of them is σ. Electric field E→ at a point between the two sheets is to be found out. 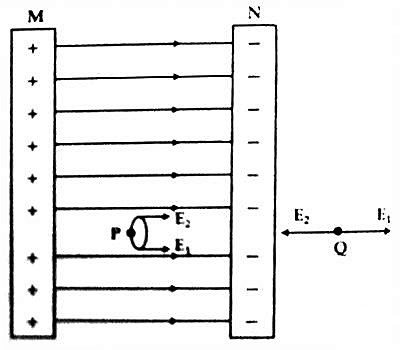 Hence magnitude of the total electric field at point P will be,

The direction of the electric field will be from sheet M to N i.e., from positive charge to negative charge.

In Conclusion, E due to two oppositely charged infinite plates is σ/ε0 at any point between the plates and is zero for all external points.