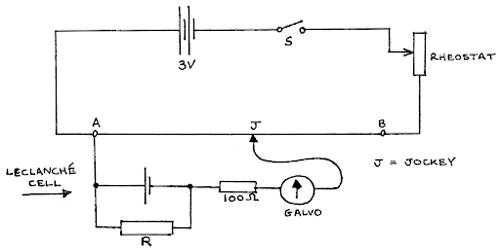 The potentiometer is a device used to measure the internal resistance of a cell and is used to compare the e.m.f. of two cells and potential difference across a resistor.

Materials Required: a potentiometer, a battery, (or eliminator) two one way key, a rheostat of low resistance, a galvanometer, a high resistance box, a fractional resistance box, an ammeter a voltmeter, a cell a jockey, a set square, connecting wires, a piece of sandpaper.

The circuit connections are made as shown in Figure. With key K open, the emf of cell E is found by connecting a high resistance voltmeter across it. 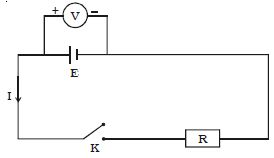 Due to internal resistance r of the cell, the voltmeter reads a value V, less than the emf of cell.

Since E, V, and R are known, the internal resistance r of the cell can be determined.

Explain Current Sensitivity of a Galvanometer