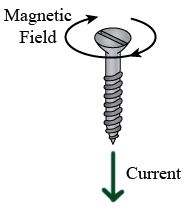 The corkscrew rule is depicted in the figure, where the corkscrew is rotated downward into the cork. When the electric current runs straight down through the center of the corkscrew, the magnetic force lines are directed along the green line shown in the photograph.

Define and Describe on Electromagnetic Spectrum

How Magnetic Field around a Straight Conductor Carrying Current?