Home Physics Causes of Energy losses in a Transformer 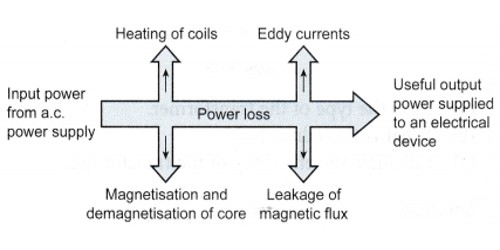 Although transformers are very competent devices, small energy losses do happen in them due to some reason.

Causes Energy losses in a transformer:

The current flowing through the primary and secondary windings leads to the Joule heating effect. Hence some energy is lost in the form of heat. Thick wires with considerably low resistance are used to minimize this loss.

Induced currents circulate in the core and cause it resistive heating. The varying magnetic flux produces an eddy current in the core. This leads to the wastage of energy in the form of heat. This loss is minimized by using a laminated core made of stelloy, an alloy of steel. The eddy currents cause heat loss. The heat loss, however, can be reduced by having the core laminated. The energy loss can be minimized by laminating the core i.e. using thin sheets of soft iron plates insulated from each other.

The alternating magnetic field causes fluctuating electromagnetic forces between the coils of wire, the core, and any nearby metalwork, causing vibrations and noise which consume power.

In addition to the above losses, due to the vibration of the core, the sound is produced, which causes a loss in the energy. Manufacturers are developing techniques that optimize these losses based on the expected loading.