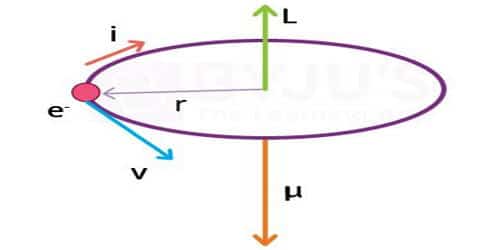 The magnetic dipole moment of a revolving electron

Current, i = e/T; where T is the period of revolution of the electron.

If v is the orbital velocity of the electron, then

Due to the orbital motion of the electron, there will be orbital magnetic moment μl

If m is the mass of the electron

mvr is the angular momentum (l) of the electron about the central nucleus.

μ/l = e/2m; is called gyromagnetic ratio and is a constant. Its value is 8.8 × 1010 C kg-1. Bohr hypothesized that the angular momentum has an only discrete set of values given by the equation.

The minimum value of the magnetic moment is

The value of eh/4πm is called Bohr magneton

What is Acceptor Circuit?