Figure shows the steps involved in charging a metal sphere by induction. 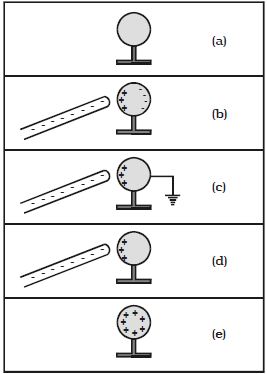 (a) There is an uncharged metallic sphere on an insulating stand.

(b) When a negatively charged plastic rod is brought close to the sphere, the free electrons move away due to repulsion and start pilling up at the farther end.

The near end becomes positively charged due to deficit of electrons.

This process of charge distribution stops when the net force on the free electron inside the metal is zero (this process happens very fast).

(c) When the sphere is grounded, the negative charge flows to the ground. The positive charge at the near end remains held due to attractive forces.

(d) When the sphere is removed from the ground, the positive charge continues to be held at the near end.

(e) When the plastic rod is removed, the positive charge spreads uniformly over the sphere.