In 1929, Robert J. Van de Graaff designed an electrostatic machine which produces the large electrostatic potential difference of the order of 107 V.

The working of Van de Graaff generator is based on the principle of electrostatic induction and action of points.

A hollow metallic sphere A is mounted on insulating pillars as shown in the Figure. A pulley B is mounted at the centre of the sphere and another pulley C is mounted near the bottom. A belt made of silk moves over the pulleys. The pulley C is driven continuously by an electric motor. Two comb−shaped conductors D and E having the number of needles are mounted near the pulleys. The comb D is maintained at a positive potential of the order of 104 volt by a power supply. The upper comb E is connected to the inner side of the hollow metal sphere. 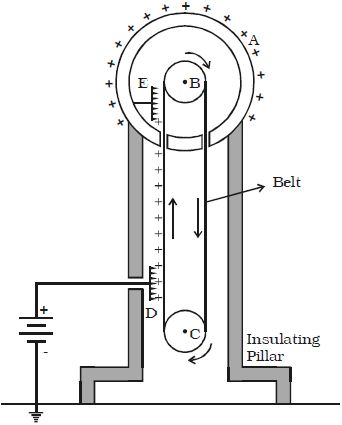 Thus the machine continuously transfers the positive charge to the sphere. As a result, the potential of the sphere keeps increasing till it attains a limiting value (maximum). After this stage no more charge can be placed on the sphere, it starts leaking to the surrounding due to ionisation of the air.

The leakage of charge from the sphere can be reduced by enclosing it in a gas-filled steel chamber at a very high pressure.

The high voltage produced in this generator can be used to accelerate positive ions (protons, deuterons) for the purpose of nuclear disintegration.