For a full circle θ = 2π rad. Note that rad is not a unit, but rather a placeholder. Thus, “rad” may appear and disappear from equations. The angular velocity is defined:

If T is the period, i.e., the time for one revolution is the average speed and is given by,

We have the period for the second hand Tsecond = 60 s, so that 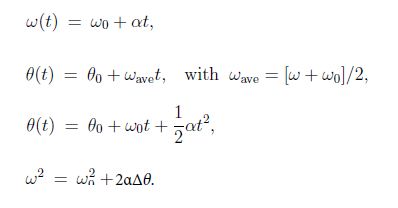 We note that these equations are identical to Equations, when quantities for linear motion (x, v, a) are replaced by the respective quantities for rotational motion (θ, ω, α).