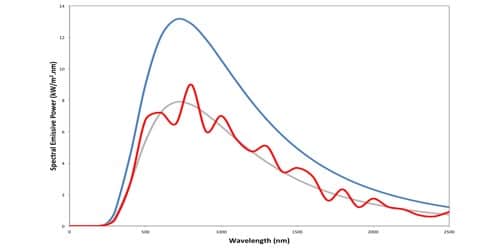 The emissive power of a body is defined as the ratio of the amount of energy emitted (or radiated) per unit area per second to the amount of emitted heat energy per unit area of a perfectly black body per second at the same temperature. All bodies will emit heat when the body temperature is above absolute zero, and this is called emission and when this emitted heat travels in the form of electromagnetic wave it is called thermal radiation. This power is the energy of thermal radiation emitted in all directions per unit time per unit area of a surface at any given temperature.

If ‘Q’ is the amount of radiant energy emitted, ‘A’ is the surface area of the body and ‘t ‘ is the time for which body radiates energy, then the emissive power is –

It is denoted by eλ.

The emissive power eλ of a body for radiation of wavelength λ to λ+dλ is the amount of radiation emitted per unit area of the body per second normally in-unit solid angle in the axial direction of the solid angle.

Work done by a Constant Force

What is heat radiation?