In 1909, scientists Geiger and Marsden, at the suggestion of Ernest Rutherford, performed a deflection experiment of alpha-particles; having an energy of 7.68 MeV emitted from the radioactive polonium, on a 6 x l0-7 m thick gold foil [Figure 1]. This experiment is known as the famous Rutherford’s alpha deflection experiment. In this experiment, they noticed that some alpha particles went straight through the foil and some particles were scattered making small angles and some went making the angle more than 90°. Some particles even scattered in the backward direction making 180° angle. 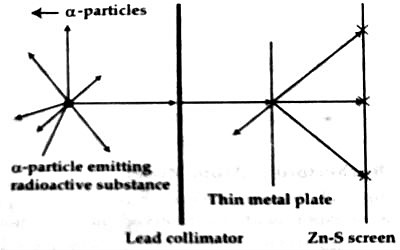 From this experiment, Lord Rutherford first proposed that scattering of α-particles through large angles is only possible if all the positive charges and the mass of the atom are concentrated at the center covering only a very small space around it. Later on in 1913, complete agreement of Rutherford’s proposal was found with the experimental results of Geiger and Marsden. From this experiment, Rutherford reached the conclusion that total positive charges and mass of the atom were concentrated at the center of a very small space. Scientist Rutherford named it as the nucleus. So, the credit of discovery of nucleus goes to Rutherford Nucleus is the heart or source of energy of the atoms i.e. the matter. By analyzing the deflection of the alpha particles and the results obtained, Rutherford put forward a model of an atom. This is called Rutherford’s atom model.