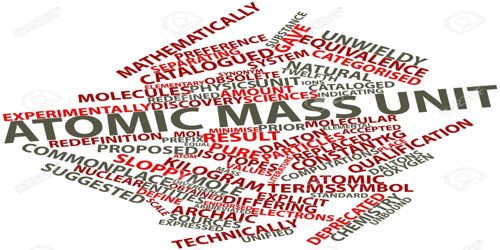 The mass of an atom is exceedingly small. So, its actual mass is not considered. The conventional unit of mass in nuclear physics is an atomic mass unit (amu). Since 1960, taking element carbon 6C12 as the standard element, the mass of other elements is determined. It is a unit of mass for expressing masses of atoms, molecules, or nuclear particles equal to 1/12 the mass of a single atom of the most abundant carbon isotope 12C, it is called also Dalton.

Masses of the neutron, protons are art expressed in a.m.u. In this unit masses of one proton and one neutron are respectively 1.007277 amu and 1.008665 amu. The mass of an atom is affected by the interactions of particles within the nucleus.

Hydrogen, for example, is the first element on the periodic table and has an atomic number of 1 and an atomic mass of 1.00794 amu, or atomic mass units.