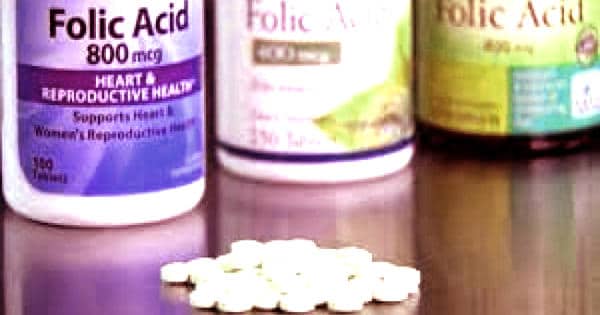 Too much folic acid can affect brain development during pregnancy

Folic acid is a B vitamin that is needed to make healthy new cells. If a woman has enough folic acid in her body before and during pregnancy, her baby is less likely to have an NTD. Neural tube defects (NTDs) are major birth defects of a baby’s brain or spine. They happen when the neural tube doesn’t form right, and the baby’s brain or spine is damaged. Women need to take folic acid every day and need to start before they get pregnant. It plays an important role in reducing homocysteine levels in the body — homocysteine is an amino acid that has been linked to both cardiovascular disorders and degeneration brain disorders.

But excess folic acid during pregnancy may create complications. A UC Davis MIND Institute study of pregnant mice found that high amounts of folic acid during pregnancy harmed the brain development of embryos. Researchers say the findings indicate that more investigation is needed about the best-recommended dosage for pregnant women. The results of the study showed that the babies of the mice that received the highest amount of folic acid had abnormal brain changes, similar to those seen in the mice with folic acid deficiency.

“We believe there’s a Goldilocks effect with folic acid. Too little is not good, too much is not good; you have to get it just right,” said Ralph Green, UC Davis distinguished professor of pathology and medicine and a corresponding author of the study.

Research has shown that folic acid levels are essential in the very earliest stages of fetal development, which has lead the Centers for Disease Control and Prevention (CDC) to recommend that women take the recommended daily dose of folic acid for at least a full month prior to conception and throughout the entirety of the first trimester in order to optimize its preventive effects.

The research, published Sept. 30 in Cerebral Cortex, involved pregnant mice who were given either a normal amount of folic acid, 10 times the recommended amount, or none. The offspring of the mice that received the largest amount showed significant brain changes. The results of the study showed that the babies of the mice that received the highest amount of folic acid had abnormal brain changes, similar to those seen in the mice with folic acid deficiency.

“It’s not subtle. It’s substantial,” said Konstantinos Zarbalis, associate professor in the Department of Pathology and Laboratory Medicine and also a corresponding author of the research. “It makes a marked difference in brain structure if you take very high amounts of folic acid.” The results of the study showed that the babies of the mice that received the highest amount of folic acid had abnormal brain changes, similar to those seen in the mice with folic acid deficiency.

Folic acid (the synthetic form of vitamin B9, or folate) supplementation is widely recommended for women of child-bearing age. It has been shown to substantially reduce the risk of neural tube defects, such as spina bifida, in children. Research, including studies at the MIND Institute, has also shown that prenatal vitamins that include folic acid have a protective effect against the development of autism and other disorders.

Green was on the panel with the National Academy of Sciences and the Institute of Medicine (now called the National Academy of Medicine) that determined the recommended daily intake of folic acid (400 mcg) and the maximum daily safe upper limit (1000 mcg). He was also on the Food and Drug Administration (FDA) panel that recommended adding folic acid to foods, which led to the fortification of all cereals and grains with folic acid mandated by the Federal Government in 1998.

“Addition of folic acid to the diet was a good thing, and I’ve supported fortification, but there is a ‘best amount’ of folic acid, and some people may be getting more than is optimal,” said Green.

During pregnancy, your immune system needs to be in the best possible shape so it can fight off any and all microorganisms that may harm you or your unborn child. You may also have to increase your nutritional intake during pregnancy as it is required for the development of your baby. But these vitamins and minerals must be taken in a precise amount as inadequate or excess amounts can harm the unborn child.

Women who have given birth to a child with neural tube defects or who have certain conditions like epilepsy and take anticonvulsants have generally been advised to take much higher doses of folic acid.

Folic acid protects unborn babies against serious birth defects. You can get folic acid from vitamins and fortified foods, such as bread, pasta, and cereals. Folate is found naturally in foods such as leafy green vegetables, oranges, and beans.