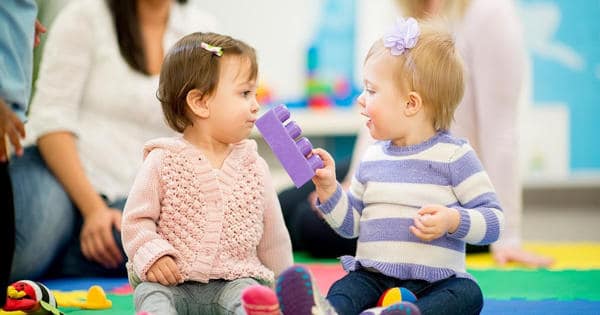 A study suggests that babies can recognize word combinations even before they have uttered their first word, challenging long-held beliefs about how children learn a language. Infants on the verge of talking are already processing multiword phrases like ‘clap your hands,’ according to assessments in 11-12 month-olds.

According to new research from the University of Edinburgh, infants may recognize word combinations before they can speak. The study, published in the journal Cognition, calls into question the notion that babies learn single words first and then progress to more complex multi-word phrases.

According to the researchers, this is the first study to show that young children can pick up and understand multiword sequences before they can talk or begin producing such combinations themselves. According to experts, the findings suggest that babies learn individual words as well as more complex phrases at the same time, challenging the belief that they progress from single words to phrases and sentences.

Babies can recognize combinations of words even before they have uttered their first word, a study suggests, challenging ideas of how children learn language.

It could also explain why adults who learn a new language later in life by focusing on individual words rarely achieve native-like proficiency.

Listening to the speech they hear helps infants learn the forms of words. Though little is known about how meaningful these forms are for young infants, the words continue to play a role in early language development. Words guide the infant to his or her first syntactic intuitions, aid in the development of the lexicon, and it is proposed that words may aid in the learning of phonetic categories.

To learn more about how infants develop communication skills, researchers assessed the language development of 11 and 12-month-olds. This study focused on language learning behaviors in 36 babies while they were subjected to a battery of attention tests.

Linguists from the University of Edinburgh used a recorded adult speech to assess 36 infants’ language learning behavior in a series of attention tests. They investigated how babies reacted to multiword combinations of three-word sequences used in parent-child conversations.

The tests used a recorded adult speech to see how the babies reacted to three-word sequence combinations. The babies’ responses were then compared by the study’s researchers, who measured how long the children looked—a phenomenon known as central fixation. The researchers discovered that some of the babies were learning their first words while also learning combinations using central fixation times.

The infants’ responses were compared using a testing method known as central fixation, which measures infants’ looking behavior in response to sounds. They tested the babies’ ability to distinguish between more commonly used three-word sequences like ‘clap your hands and similar but less common phrases like ‘take your hands.’ Fixation times were longer on average for frequently used phrases. This pattern was discovered in 23 of the 36 infants studied.

According to the researchers, this suggests that babies who are still learning their first words are also learning word combinations. According to experts, this development occurs months before parents hear their children’s first attempts at word sequences. Infants begin by discovering aspects of their native language’s sound structure. Precocious auditory system development and innate sensitivity to acoustic variation along linguistically important dimensions allow for rapid learning of consonants and vowels in the native language, in some cases even before children attempt to say their first words.

According to Dr. Barbora Skarabela of the School of Philosophy, Psychology, and Language Sciences: “Previous research has shown that many common words are recognized by young infants. However, this is the first study to demonstrate that infants extract and store more than single words from everyday speech. This implies that when children learn language, they build on linguistic units of varying sizes, including multiword sequences, rather than single words, as is commonly assumed. This could explain why adults learning a second language who rely on individual words often fall short of attaining native-like proficiency in the way they string words together into phrases and sentences.”

“This may explain why adults learning a second language, who tend to rely on individual words, often fall short of attaining native-like proficiency in the way they string words together into phrases and sentences,” Dr. Skarabela added.

The study was co-authored by researchers from the Hebrew University of Jerusalem.