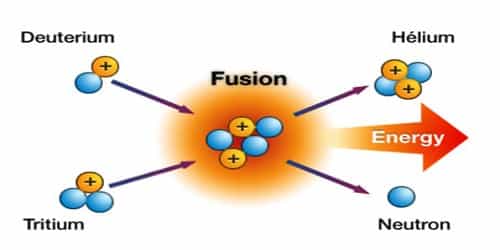 The process in which more than one light nucleus is combined together to form a relatively heavier nucleus and liberates a tremendous amount of energy, that process is called nuclear fusion. For this reason, fusion is called the reverse process of fission. Since Fusion takes place at extremely high temperature, hence this reaction is called thermo-nuclear reaction. The value of this temperature is about 108°C.

As an example, 4 nuclei of hydrogen atoms when combined together to form a helium nucleus, then the mass of the helium nucleus becomes slightly less than the total mass of the 4 hydrogen nuclei. The reduced mass is converted into energy. Consequently, a tremendous amount of energy is produced. For this reason in fusion reaction isotopes of hydrogen – deuteron (2H1 or, 2D1), tritium or Triton (3H1) are used. When the nucleus of a tritium having a velocity of 800 kms-1 collides with a nucleus of deuterium, then helium nucleus is formed in fusion process and along with it a tremendous amount of energy is released. The reaction is,

In each fusion reaction of this type 17.6 MeV energy is released. Most of the energy radiated from the surface of the sun is produced by the fusion of protons to form helium atoms within its core. Inside the sun fusion reaction is taking place and an enormous amount of energy is generating, an only a small fraction of this energy reaches to our earth.