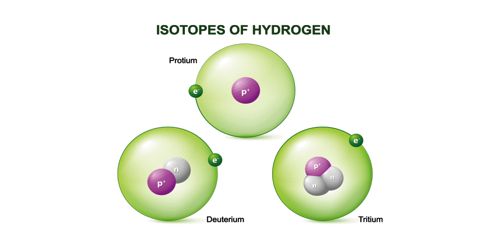 Isotopes: Atoms of an element having a same atomic number but different atomic masses are called isotopes. They are atoms that have the same number of protons and electrons but different numbers of neutrons and therefore have different physical properties.

‘Iso’ means same and tope means place i.e., in the periodic table they occupy the same place. Their chemical properties are the same but other properties are different. Further, we can say that those atoms which have the same number of electrons or protons but have a different number of neutrons, they are called isotopes. There are 275 isotopes of the 81 stable elements. There are over 800 radioactive isotopes, some of which are natural and some synthetic.

Carbon 12 and Carbon 14 are isotopes of carbon, one with 6 neutrons, and one with 8 neutrons (both with 6 protons).

Carbon-12 is a stable isotope, while carbon-14 is a radioactive isotope (radioisotope).

Mean Life or average life of a Radioactive Element