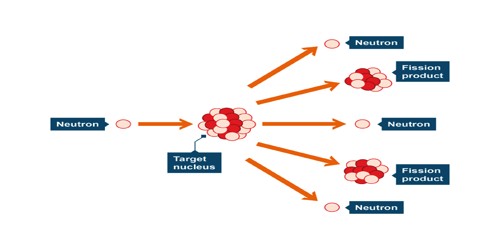 Nuclear fission is the disintegration of a large nucleus into two smaller nuclei by the capture of a thermal neutron. The process in which a heavy nucleus splits up into two nuclei of nearly comparable masses and emits an enormous amount of energy is called nuclear fission or nuclear division. Fission is a form of nuclear transmutation because the resulting fragments are not the same element as the original atom.

As an example, when a uranium nucleus is bombarded by high energy neutrons or protons or deuterons, then fission takes place. The reaction can be represented as –

That means, due to a bombardment of 235U92 by a neutron, capturing the neutron it has transformed into an unstable 236U92 nucleus. This unstable nucleus disintegrates by fission process into the nuclei of barium and krypton and generates 3 neutrons from one neutron. Because of the bombardment of other nuclei of uranium by these neutrons more fission takes place and chain fission reactions continue to occur. When 235U92 nucleus is bombarded by a neutron not only the reaction of the equation (1) takes place, other different reactions also take place. For example,

It is to be mentioned that in the process of nuclear fission, the mass of the disintegrated nuclei is slightly decreased. This missing mass appears as energy according to the Einstein’s mass-energy equation [E = Δmc2] and due to fission tremendous amount of energy is released continuously. It has been seen that in each fission reaction about 200 MeV of energy is generated. If this reaction cannot be controlled then it will transform into atomic bomb explosion. And if it can be controlled then the reaction inside the nuclear reactor will be a controlled fission reaction.