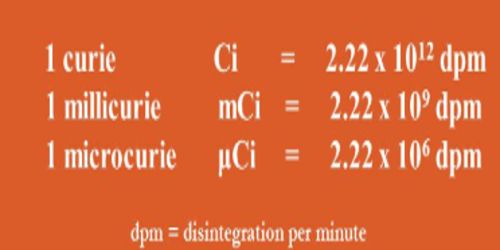 Radioactivity is a spontaneous disruptive process. It refers to the particles which are emitted from nuclei as a result of nuclear instability. These radiations are termed as radioactive rays. Generally, these radiations consist of some particles like alpha and beta particle in some time charge less gamma rays emitted.

There are two units of radioactivity, viz –

Curie: Disintegration of 3.7 x 1010 number of atoms in one second is called 1 Curie.

or, If 3.7 x 1010 atoms of a substance is disintegrated per second then radioactivity of that substance is 1 Curie.

This unit is very large, so milli Curie and micro Curie are also used as the unit of radioactivity.

(2) S.I. unit of radioactivity is Becquerel:

The disintegration of 1 atom per second of a substance is called 1 Becquerel (Bq).